The contest, held four times throughout 2021, will give Black film creators, enthusiasts, and fans the opportunity to showcase their work. 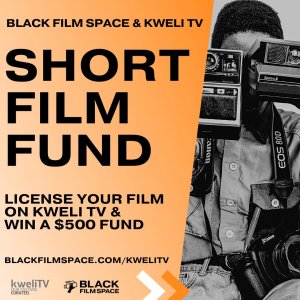 To enter, you must first be a member of Black Film Space. Your film has to be between 7-29 minutes, have at least one festival submission, and all outstanding licensing must be fulfilled. Winners will receive a $500 grant and a 12-month licensing agreement with kweliTV. The full contest rules can be found on the sign-up page.

Black Film Space, established in 2015, is designed to give independent Black creators support and tools to advance their careers. Black Film Space Co-Founder and Director of Operations, Reggie Williams, is happy to bring in the new year with such a partnership.

“We’re thrilled to launch the new year and our new membership plan by partnering with kweliTV. Our short term and long-term goal are to offer more exposure, career advancing opportunities and grants for Black filmmakers and we believe this partnership is a great first step in accomplishing our mission,” said Williams.

In addition to the contests, kweliTV is also accepting films in all genres to be screened on the platform. kweliTV Founder and CEO, DeShuna Spencer, is excited about the collaboration to give more opportunities to independent Black creators.

“Collaborating with Black Film Space further deepens our commitment to amplify talented, up and coming black creatives. I’m elated to be working alongside this amazing organization,” said Spencer.

About Black Film SpaceBlack Film Space is a non-profit organization created to support a committed collective of directors, writers, producers, actors and other creative professionals of African-decent in advancing their careers in film, television, web and other media platforms. The organization is dedicated to providing professional development programming, networking resources and connecting like-minded filmmakers and creatives to enhance their skill set and access to opportunities.

About kweliTVkweliTV is a digital platform that allows you to discover and celebrate black stories through curated indie films, documentaries, web series, kids’ shows, news and live experiences from around the world—North America, Africa, Latin America, Europe, the Caribbean and Australia. Visit: www.kweli.tv.