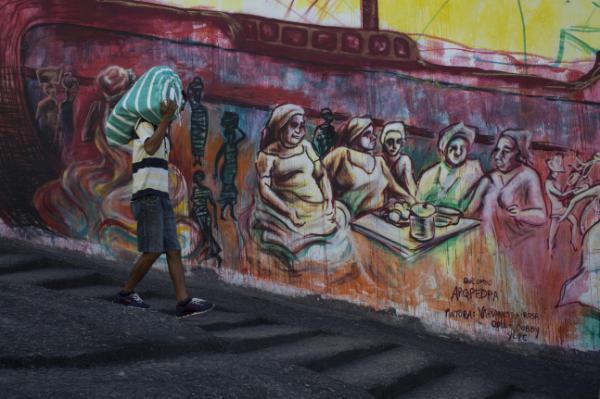 RIO DE JANEIRO _ Taken from Africa and sold into slavery in Brazil, Mahommah Baquaqua’s tale of escape to freedom in New York is the only known story of its kind, an in-depth, firsthand account of slavery in the South America country.

But few in Brazil are aware of Baquaqua’s biography which, 160 years after it was written, is being published in Portuguese for the first time as momentum builds for the country to examine its complex racial past.

A truth commission was established this year to investigate Brazil’s 350-year period of slavery. Next year, tourists coming for the Olympic Games will be able to walk a pathway marking historical sites such as a mass grave for slaves who died en route from Africa.

A website about Baquaqua’s life will launch next month; work on a children’s book is under way; and school teachers in a northeastern state are being coached on how to incorporate him into their lessons.

“We are seeing a lot of interest from the general public to know about this story,” said Bruno Veras, one of the researchers and translators working to bring Baquaqua’s biography to a Brazilian audience.

“Brazil is essentially African but it does not feel that way,” he said. “The story of Baquaqua brings this new possibility for people to identify with this new character.”

Before abolishing slavery in 1888, becoming the last country in the Americas to do so, Brazil was the world’s largest slave market. But modern researchers say earlier experts were eager to feed into the country’s mythology of racial democracy and spread a false notion that slavery in Brazil was benign compared to that of the United States.

“It was cruel just like anywhere else. But it’s unknown to the population, especially to our black population, our youth,” said Marcelo Dias, president of the Rio de Janeiro bar association, which set up the truth commission.

Unlike in the United States, where thousands of slaves recorded their stories of bondage and freedom during the campaign for abolition, Baquaqua’s extensive account is the only one known to exist from Brazil.

Baquaqua dictated his story, speaking in imperfect English, while living in Canada in 1854. He said he’d been born to a merchant family around 1824 in West Africa, in what is now Benin. While acting as a messenger and assistant for a local chieftain, he was captured in 1845 and shipped to a beach near Recife, Brazil. He was sold to a baker, whom he said would beat him even during church services. Later, he was sold in Rio de Janeiro to the captain of a merchant ship, which sailed in 1847 to New York, where slavery had been abolished.

As he recounted, “the first word in English that my two companions (from the ship) and myself ever learned was ‘free.”’

Baquaqua tried to escape as soon as the vessel arrived in New York but was jailed. He later broke free with the help of abolitionists and fled to Boston, then Haiti.

Baquaqua later travelled to Great Britain, intending to travel to Africa as a Christian missionary. But any record of him after 1857 has yet to be found and it’s unclear what became of him.

“The Biography of Mahommah G. Baquaqua” was printed in Detroit in 1854 and the former slave went on speaking tours to promote the book, said Paul Lovejoy, an expert in African diaspora history at York University in Toronto who helped resurrect the biography for a 2007 edition.

It’s not clear how many copies were printed, but the story circulated primarily among abolitionists in the United States, Lovejoy said. It never was distributed in Brazil, where printing presses long were banned by Portuguese colonizers.

Many scholars believe the lack of slave narratives in Brazil kept the country from understanding its true history. The so-called Baquaqua Project, the drive to spread his story and further research his life, is part of a wide effort involving historians, artists and lawyers working to uncover the country’s past.

The truth commission led by Dias could seek reparations from the state for what he said is a “historical obligation.” While black people today count for half the population, giving Brazil more blacks than any country beside Nigeria, 18 per cent hold important positions in large companies, Congress, courts or the entertainment industry, according to a recent survey by newspaper Folha de S. Paulo.

Through partnerships with universities in the U.S. and Angola, the commission and others hope to access even more archives kept abroad that could help quantify how much the government gained by taxing slave traders.

“Our role is to reopen old wounds,” Dias said.

The idea to publish Baquaqua’s life story in Brazil came last year from Lovejoy, who knew Veras from their mutual work on a project to build an international database of slave biographies.

Baquaqua’s story, Lovejoy said, “allows teachers to have an example they can talk about at a level kids can understand. It’s no longer an abstract concept.”

The book will be released in Portuguese later this year. In August, Veras will launch a website to share information about Baquaqua and he currently is leading workshops in Pernambuco state to help teachers incorporate the tale in their curricula. An artist in Bahia is helping illustrate a version of the story for children.

Since 2003, Brazilian schools have been required by law to teach African studies, but scholars say there still isn’t enough material and expertise.

“We have no reference of anything, know nothing of our culture that is not the cliche samba and feijoada,” said Juliana Luna, referring to Brazil’s traditional stew.

The 29-year-old website entrepreneur was among dozens of Brazilians chosen for a recent documentary project that used DNA samples to trace ancestral connections to Africa. Luna traced her roots to Nigeria, where she was taken by the project to visit a slave port near Lagos.

The experience, she said, changed her image of herself. “I am part of something much bigger than I imagined.”