LOS ANGELES, Aug. 20, 2021 /PRNewswire/ — Stand Up To Cancer® (SU2C) will honor the beloved Chadwick Boseman with a special tribute by his wife Simone and host Anthony Anderson at this year’s fundraising special.  Boseman passed away last year at the age of 43 after a private battle with colon cancer. 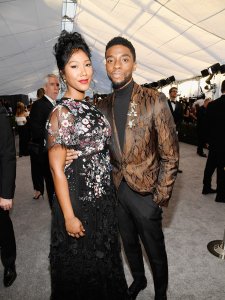 Chadwick Boseman was fueled by purpose and sought to fulfill that through writing, directing, acting and activism. His breakout performance came when he slid into the weighty shoes of Jackie Robinson in 42, but it was in his next role as James Brown in Get On Up that would distinguish him as a leading man in the industry, receiving numerous accolades for his masterful portrayal. He then starred in the title role of Marshall, which followed a young Thurgood during a career-defining case. Boseman joined the Marvel Cinematic Universe as the African superhero “Black Panther” in Captain America: Civil War, before bringing the character to the forefront of his own solo film, Black Panther, which received critical acclaim, broke global box office records, and had a social and cultural impact felt around the world. The film received seven Academy Award nominations, including Marvel’s first-ever Best Picture nomination. Boseman won the NAACP Image Award for Outstanding Actor in a Motion Picture, and the Screen Actors Guild Award for Outstanding Performance by a Cast in a Motion Picture alongside the film’s ensemble. In 2019, Boseman starred in 21 Bridges, which he produced alongside his partner Logan Coles, through their shingle X•ception Content. Last year, he appeared in Da 5 Bloods, directed by Academy Award winner Spike Lee, as fallen soldier “Stormin’ Norman.” In Ma Rainey‘s Black Bottom, a screen adaptation of the famed August Wilson play, Boseman starred as “Levee.” His captivating performance garnered an Academy Award nomination and won the NAACP Image Award, Critics’ Choice, and Screen Actors Guild Awards, as well as numerous others.

Stand Up To Cancer’s biennial telecast and streaming event will air simultaneously on more than 60 participating media platforms across the United States and Canada, including all four major broadcast networks in the U.S. on Saturday, August 21 at 8PM ET & PT / 7PM CT from Los Angeles. Broadcasters carrying the show are donating one hour of simultaneous commercial-free prime time. The telecast will also be available to stream live and on-demand on several streaming platforms.

SOURCE Stand Up To Cancer