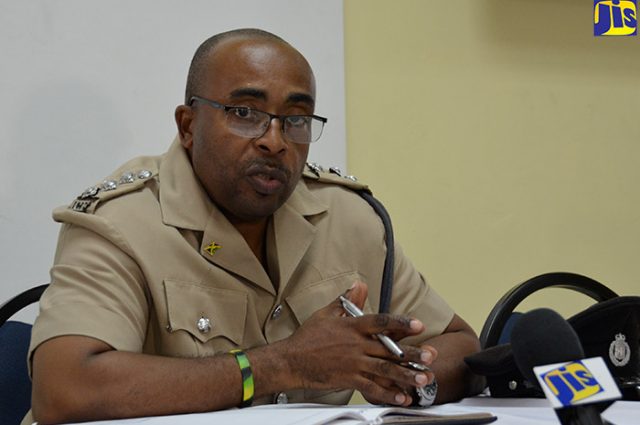 The St. James Police Division is expressing satisfaction at how the Enhanced Security Measures in the parish have been progressing, particularly the impact in suppressing gang activities.

Authorised Officer for Detainees, Deputy Superintendent (DSP) Ainsley McCarthy, told JIS News in an interview on Thursday, March 1, that during the period ending February 28, a total of 916 persons were taken into custody.

He said 65 of the detainees were charged for “various offences” and that 24 of the 916 still remain in detention. He said among those detained were 37 juveniles between the ages of 15 and 17, who were processed and later released by the Jamaica Constabulary Force (JCF).

“Of the 24 persons that we have in custody, we have an interest in a number of them, who are in some way or another related to gangs,” DSP McCarthy said.

“We have applied for 10 detention orders from the Minister (of National Security) to have some of these persons remanded in custody for an extended period of time. We also intend to apply for detention orders for a further seven who are in custody,” he explained.

DSP McCarthy said since some of the detainees were taken into custody during the Enhanced Security Measures, there has been a noticeable decrease in gang activities and the “parish has been returning to some sort of normalcy”.

He noted that at the beginning of the operations, “there were some opening guidelines for shops, bars, clubs, gas stations and other businesses, but those hours were reviewed and extended” and the Constabulary is “pleased with the results that we are seeing so far”.

DSP McCarthy said the issue of overcrowding and other glitches that were experienced in the initial stages of the operations have been resolved, resulting in less persons showing up at the facility “in search of loved ones” who were detained.

“At the beginning, there were some teething problems, as you would have at the initial stage of any development. That has been ironed out,” he said.

Turning to other matters, the officer said the JCF is imploring members of the public who experience delays in traffic flow at vehicle checkpoints at the various parish borders “to be patient and just work with the security forces as they try to resolve the issues that had put St. James on the map in a negative way”.

He also urged residents of St. James and other neighbouring parishes to “work along with the security forces” and ensure they report any new persons they see coming into their districts, as many Wanted Men “are trying to make their way into other districts as a means to elude the police”.