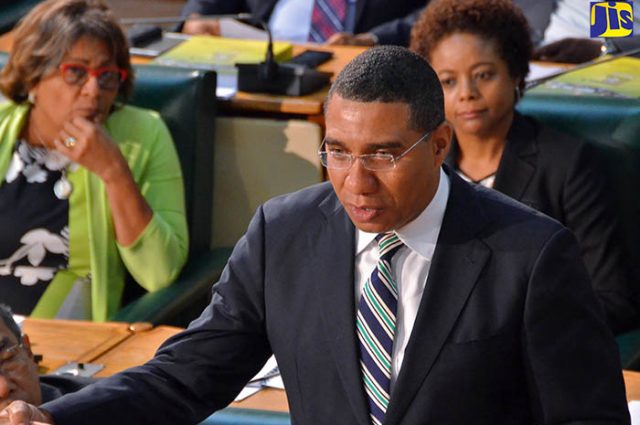 Photo: Prime Minister, the Most Honourable, Andrew Holness making his contribution to the debate on the National Registration and Identification Bill, 2017 in parliament on Tuesday, June 13.

Prime Minister, the Most Hon. Andrew Holness, says the Government is making the establishment of the National Identification System (NIDS) a priority.

He said the system will have a “positive transformational effect” on the country and serve to improve the lives of Jamaicans.

“It will support the ease of doing business by impacting positively on security-related programmes, while promoting financial and social inclusion, as well as compliance with tax laws,” he noted.

Prime Minister Holness was opening the debate on the National Identification and Registration Bill in the House of Representatives on Tuesday (June 13).

The Bill seeks to facilitate the establishment and regulation of a system for the registration, verification and authentication of the identity of citizens and other persons residing in Jamaica; and establishment of a National Civil and Identification Database to generate national identification cards.

It also provides for the establishment of the Registrar General’s Department (RGD) as the National Identification and Registration Authority, which will have responsibility for the project’s implementation.

To be rolled out in 2018, NIDs will provide a comprehensive and secure structure to capture and store the personal identity information of all citizens.

Under the system, which will have anti-fraud features, every Jamaican will have a unique nine-digit identification number that will support identity authentication and verification in a consistent way across government agencies as well as for the benefit of the private sector.

The Prime Minister said discussions around the NIDS have been ongoing for more than 40 years, and it is now time “to cease talking and to act on this vital tool for the betterment of the people of Jamaica”.

“At present, Jamaica does not have a national identification database, which can reliably and uniquely verify the identity of its citizens. What we have, at this time, is the existence of a number of specific identification systems and cards for various ministries, departments and agencies,” he pointed out.

Additionally, the system will provide for reduced duplication of efforts in establishing, verifying and managing identity; increase growth of e-business; create social and financial inclusion; reduce identity theft and fraud; and enable real-time capture of all vital statistics, which will better inform national planning, and completeness and quality of data.

Prime Minister Holness said a national identification system will translate to an improved international standing and credibility for the country.

“It will be a gateway for Jamaica to become a digital economy, which will impact positively on growth,” he pointed out.
Debate on the Bill is to continue in the Lower House.