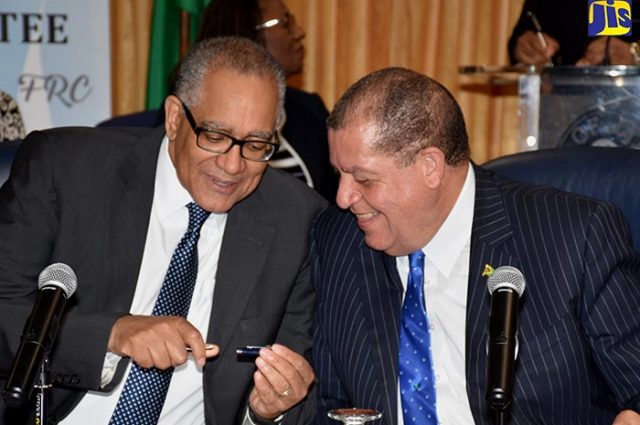 The framework facilitating oversight of Jamaica’s financial sector by the Financial Regulatory Committee (FRC), will be further strengthened through a memorandum of understanding (MOU) that has been established.

Finance and the Public Service Minister, Hon. Audley Shaw, has endorsed the MOU, which was signed by representatives of member agencies comprising the FRC, at the Bank of Jamaica (BOJ), downtown Kingston, on Wednesday (March 14).

The MOU’s provisions include facilitating each member’s effective performance of their statutory duties; minimising opportunities for regulatory arbitrage (purchasing securities in one market and simultaneously selling them in another at higher prices, thereby profiting from the temporary difference in prices); adequately preparing for intervention and other regulatory actions; and reducing the regulatory burden and duplication of requirements for regulated entities.

In addition, the FRC’s members will share status reports containing system data, trend analyses and any major risk in their respective areas of operation. These include reports on the overall condition of regulated institutions.

The FRC will also develop and recommend policy changes, particularly related to issues having far-reaching implications, with members sharing information on areas of significant regulatory concern.

Additionally, members will advise each other of intended policy changes that could affect regulated institutions in other sectors.

Mr. Shaw expressed satisfaction with the MOU’s tenets. “The FRC will uphold existing policies and develop new procedures and strategies to facilitate the accomplishment of their individual and joint regulatory goals,” he said.

He underscored the importance of the FRC’s work against the background of a financial landscape, which he said is now “leaner and more agile”.

This, the Minister noted, in the wake of the number of divestments, mergers and acquisitions that have taken place “with some players existing as financial holding companies that participate in every aspect of the sector”.

Mr. Shaw said stand-alone enterprises, like securities dealers and credit unions, have advanced their operations and introduced innovative tools, products and services that can support wealth creation and fuel growth.

He contended that this type of organisational arrangement requires special regulatory attention and an all-encompassing framework capable of addressing the complexities that could potentially arise.

Noting Jamaica’s past economic and financial crises, which led to the Government’s formation of the Financial Regulatory Policy Council, now the FRC, in 2000, Mr. Shaw said he remains committed to being “proactive and decisive” in his oversight of the sector to ensure its resilience against future domestic and global shocks.

He said that Jamaica’s robust financial sector should, instead, be able to take advantage of opportunities that could surface in those situations.

“I am satisfied that the Financial Regulatory Committee will uphold existing policies and develop new procedures and strategies to facilitate the accomplishment of their individual and joint regulatory goals.

In his remarks, Mr. Wynter said the MOU represents a renewal of the entities’ partnership that was established in 2000, consequent on the tabling of a Ministry Paper in Parliament resulting in the establishment of the Financial Regulatory Policy Council.

The Governor further indicated that the Bank of Jamaica Act was amended in 2014 to enshrine the Council in law as a statutory committee, to reflect the Government’s commitment to bolster the ability of financial sector regulators and policymakers to oversee and more effectively manage the “ever-changing and increasingly more sophisticated and dynamic financial landscape”.

Mr. Wynter said a key task being pursued by the FRC is preparation of the framework for a special resolution regime for financial institutions that will enhance Jamaica’s capacity to take “orderly and timely” action, in order to minimise the impact of a failing or failed regulated institution on the system as also the public