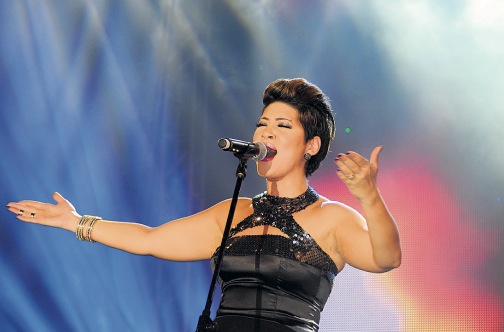 JAMAICANS gave Tessanne Chin the welcome she deserved at the Shaggy and Friends charity event at Jamaica House in St Andrew on Saturday night.

It was the singer’s first local performance following her historic win on the NBC talent show, The Voice, in December.

The headliner took the stage at near 12:30 am to wild cheers and delivered a hour-long set replete with the songs which made her known in Jamaica as well as pieces from her journey through The Voice.

Opening with Hoobastank’s The Reason, she reminded the audience of the event’s objective and then launched into Try, Underneath It All, Redemption Song and Many Rivers to Cross.

Just before a break in her set for the obligatory costume change from the plum jumpsuit to a classic black evening dress, she did When I’m With You, Ready to Go, Hold Me with Shaggy, and the electrifying Messenger.

Her set break would be filled by fellow season five Voice alum Matthew Schuler who delivered three tracks: When A Man Loves a Woman, the haunting Hallelujah and Wayne Wonder’s No Letting Go.

Chin wrapped her set with the powerful I Have Nothing, injected a little reggae into her Ryan Tedder-penned single Tumbling Down, and culminated with her break-out hit Hideaway.

With her exit from the stage, so did a number of patrons.

Prior to Chin’s set, a number of acts rocked the stage. The ‘Big Belly Man’ Admiral Bailey took his audience back with his hits from the 1980s and 1990s. Carlene Davis took a stroll into her secular past with Winnie Mandela, Like Old Friends Do and Going Down to Paradise before climaxing with a gospel medley.

Wayne Marshall also impressed, especially after being joined by his eight-year-old son GioMar on Stupid Money, with fellow deejay Agent Sasco aka Assassin.

This segued into a surprise appearance by Damian ‘Junior Gong’ Marley, who rocked the house with Welcome to Jamrock.

The man behind the event, Shaggy, was not to be left out. He did some of his signature tunes.

For the original report go to http://www.jamaicaobserver.com/entertainment/FRIENDS-rally-for-CHARITY_15743395