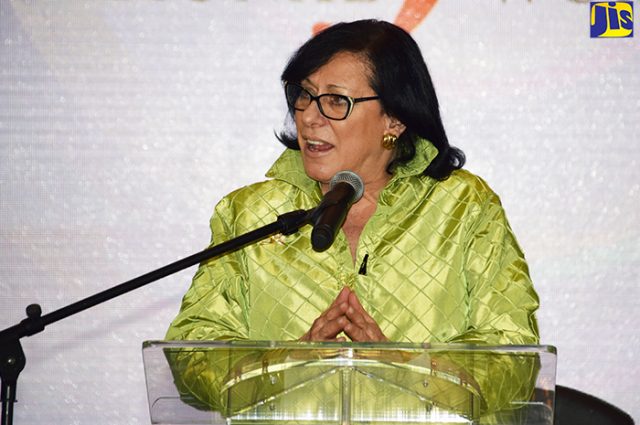 Photo: Futurist, Edie Weiner, speaking at an International Women’s Forum (IWF) even at The Jamaica Pegasus hotel on March 20.

World-renowned Futurist, Edie Weiner, has urged the Government to underpin growth initiatives with a fundamental focus on education, as half of the country’s population is below the age of 25.

“You have to be thinking about putting almost all of your resources into the future of your economy,” she said.

Ms. Weiner was speaking at an International Women’s Forum (IWF) event, held on March 20 at The Jamaica Pegasus hotel, in New Kingston.

She further encouraged the facilitation of a culture of pride and respect by the people of Jamaica for each other and the country, adding that this will lead to Jamaicans being personally committed to the push for economic growth.

“With pride and respect, people will work on achieving the initiatives, but without, they don’t feel they have a stake,” she said.

Ms. Weiner said making the beautification of the built environment a priority, through the utilisation of local artistic skills, will serve to facilitate that critical pride and sense of ownership by the people.

“The one obligation that all of us have is to dream bigger for the next generation,” she said.

The Futurist also used the opportunity to commend the growth initiatives published by the Economic Growth Council (EGC) for the achievement of the Government’s economic and job creation goals.

Meanwhile, President of the IWF, Jamaica Chapter, Camille Facey, said the invitation was extended to Ms. Weiner, who is the Chief Executive Officer of one of the world’s leading Futurist consulting firms, The Future Hunters, in order to facilitate the start of important conversations, locally, relating to the projected impact of scientific and technological advances on society.

“The issues that she is talking about are going to change our lives. These things are happening and they are going to affect us and we must prepare ourselves. So, we wanted to ensure that we could begin to prepare ourselves to take advantage of the opportunities of the new civilisation,” she said.

Ms. Facey said she believes the presentation has stirred in the attendees a desire to do more research and change the way they look at the world.

The event was attended by Ministers of Government; former Prime Minister, Hon. Bruce Golding; Members of the House of Representatives and the Senate; the EGC Chairman, Hon. Michael Lee-Chin; and other leaders in academia, business and government.

The net proceeds from the event will go towards supporting a women’s shelter.