Garvey Museum to be Established in St. Ann 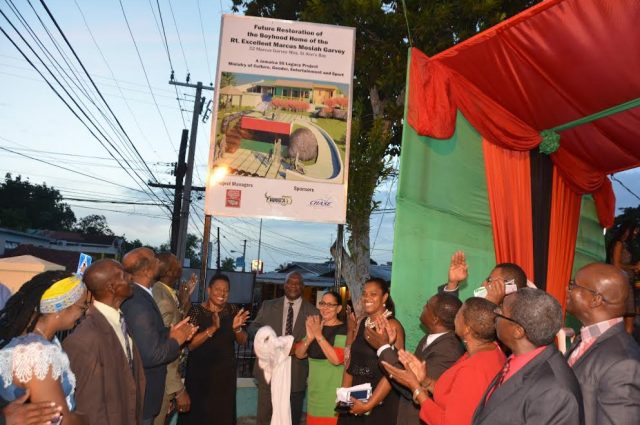 Minister of Culture, Gender, Entertainment and Sport, Hon. Olivia Grange (fifth left) and Minister of Labour and Social Security, Hon. Shahine Robinson (seventh left) applaud after unveiling the new design for a museum in honour of Jamaica’s first National Hero, the Rt. Excellent Marcus Mosiah Garvey. The facility will be built on lands in St. Ann’s Bay, St. Ann, where the National Hero grew up. The unveiling took place at the Civic Ceremony commemorating the 130th birthday of Mr. Garvey in Lawrence Park, St. Ann’s Bay, on August 17.

Minister of Culture, Gender, Entertainment and Sport, Hon. Olivia Grange, says the legacy of Jamaica’s first National Hero, the Rt. Excellent Marcus Garvey, will be protected through the establishment of a museum in St. Ann.

Speaking on August 17 at a ceremony in St. Ann’s Bay, St. Ann, to mark the 130 th anniversary of the birth of Mr. Garvey, the Minister said the museum will be established at the location where the national Hero spent his formative years before becoming one of the world’s most influential leaders.

Miss Grange said the museum will capture all aspects of the life and times of Marcus Garvey, adding that it will be spearheaded by the Jamaica National Heritage Trust (JNHT), with support from the Ministry and other state agencies.

She said that the occupants of the land which has been earmarked for the museum (32 Marcus Garvey Way, St. Ann’s Bay), will be relocated and that there will be a major public education drive to promote the facility.

“This development will be supported by public education on the life of young Garvey intertwined with the history of St. Ann’s Bay, which will form the backdrop of this transformative man. The boyhood home of the Rt. Excellent Marcus Garvey will create a live museum with household furniture and other exhibits used during the period Garvey resided there…The research is on-going,” the Minister said.

Miss Grange said the museum will provide economic opportunities for members of the community, such as walking tours, among other activities.