Governor-General, His Excellency the Most Hon. Sir Patrick Allen, inspects the Guard of Honour mounted by members of the Jamaica Defence Force, at the 2020/21 ceremonial opening of Parliament, today (February 11). 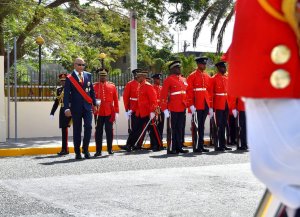 Governor-General, His Excellency the Most Hon. Sir Patrick Allen (left), inspects the Guard of Honour mounted by members of the Jamaica Defence Force at the 2020/21 ceremonial opening of Parliament today (February 11).

The 2020/21 session of Parliament got under way today (February 11), with the traditional pomp and pageantry.

It was highlighted by the delivery of the Throne Speech by Governor-General, His Excellency the Most Hon. Sir Patrick Allen.

His address outlined the priority programmes and policies to be pursued by the Government in the new fiscal year, which begins on April 1. It was delivered under the theme ‘Towards a Decade of Growth to Anchor Our Peace and Prosperity’.

On his arrival, the Governor-General inspected the Guard of Honour mounted by members of the Jamaica Defence Force, after which he entered the chambers of the House accompanied by the Commissioner of Police, Major General Antony Anderson; and Chief of Defence Staff, Lieutenant General Rocky Meade.

In attendance were invited guests, including Permanent Secretaries from the various Ministries, and members of the diplomatic corps. 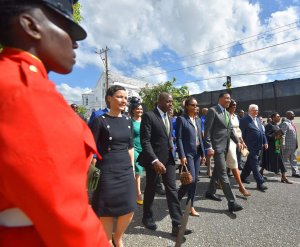 Members of the Senate were the first to take their seats inside Gordon House, followed by the President of the Senate, Tom Tavares-Finson.

The Speaker of the House of Representatives, Hon. Pearnel Charles Sr., then entered the chambers, followed by Prime Minister, the Most Hon. Andrew Holness; Leader of the Opposition, Dr. Peter Phillips; and Members of Parliament.

For the 2020/21 fiscal year, the Government will have as its priority the tabling of a number of legislation, including the new National Identification System (NIDS) Bill; amendments to the Registration of (Births and Deaths) Act, and undertaking a review of the National Housing Trust Act and Regulations.

Focus will also be placed on the tabling of other critical pieces of legislation that will improve Jamaica’s economy, including An Act to Establish an Independent Fiscal Council, the Pension Superannuation Fund and Retirement Schemes Amendment Bill, and the Amendment to the Financial Services Commission Act.

The coming year will also see continued heavy investment in infrastructure under the Greater Infrastructure Development Programme (GIDP). The GIDP is a multi-year comprehensive infrastructure programme, which includes not just roads but bridges and structures, street lighting, sidewalks and ramps, traffic lights, water and sewerage, fire hydrants and drainage.

The matter of national security will also be of high importance, as through the infusion of technology and significant capital investment, the Government will continue its multi-agency approach to social-intervention efforts.

In addition, major works to expand court infrastructure will also be advanced to develop three regional judicial complexes in the parishes of Manchester, St. Ann and St. James and one Parish Court in St. Catherine.

Later in the afternoon, the Lower House had its first official sitting for the new fiscal year, where the proposed Budget for 2020/2021 was tabled by the Minister of Finance and the Public Service, Dr. the Hon. Nigel Clarke.