Action Must be Taken with Medical Marijuana Industry – Dr. Wheatley 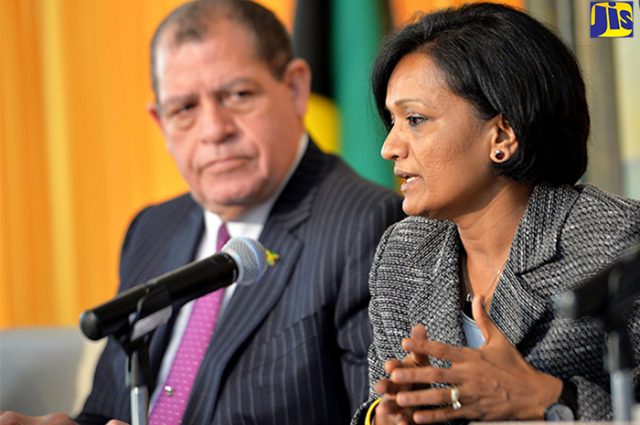 The International Monetary Fund (IMF) has given Jamaica high marks for its economic performance in its review of the country’s Stand-by Agreement (SBA), issued on Tuesday (April 18).

The IMF says programme implementation remains strong under the SBA.

“Sustained macroeconomic discipline and visible reforms have boosted stability and confidence. Positive real GDP has been recorded in seven consecutive quarters and Jamaica is projected to grow by two per cent in fiscal year 2017/18, bolstered by construction and tourism, among other factors,” the Fund notes.

“Inflation reached an all-time low in 2016 and investor confidence is at an all-time high, attracting foreign direct investments. The current account deficit has narrowed significantly, supporting accumulation in non-borrowed reserves,” the IMF adds.

The IMF further mentions that the primary balance over-performed the target by J$23 billion, with tax revenues being $22 billion above target. The Fund also draws attention to the fact that the

Net International Reserves (NIR) exceeded the target by over US$240 million at the end of December when inflation recorded only 1.7 per cent.

All but one of the quantitative performance criteria were met and the one that was not met represented delays in handling suppliers’ credits which, the Fund adds, have since been cleared.

The multilateral institution also has high praise for the Government’s “significantly higher budget allocation for social spending,” which it says will “insulate Jamaica’s poor and vulnerable from the impact of the rebalancing to indirect taxes.”

With regard to the financial sector, the Fund mentions that the banks’ capital adequacy ratio of 14.9 per cent was “well above the regulatory minimum” of 10 per cent. Mention is also made of the doubling of the credit going to the private sector since April last year.

The Executive Board says “decisive policy actions are required” to improve public sector resource allocation and efficiency. The Board expresses the view that reducing the Government’s wage bill and lowering pension costs are important to shifting Jamaica’s limited fiscal resources to productive spending.

The IMF, in its 74-page review, supports the recently announced policy decision to de-earmark the funds for public sector bodies and moving them to the Consolidated Fund.

This, it says, will improve transparency and efficiency in spending, “consistent with broader public financial management.”

The Washington-based institution says that preserving the social consensus for reform “will be critical” in sustaining the gains of macroeconomic stability.