Commentary And Audio Of Song “Crucial” By Bunny Wailer.

Jael Joseph, the girl with the BIG Idea. 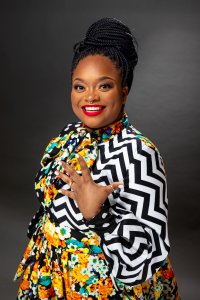 As an immigrant in Canada Jael Joseph quickly realized in her early days in the North American country, that her ethnicity would play a great role in how she navigated life in this new locale.  She was part of the minority and even so, her heritage made her part of a smaller grouping within the Black community.

“I am a descendant of African slaves, white colonizers and native indigenous people called the Kalinago. I am a Black Island Girl.”

Born in the Eastern Caribbean island of Dominica, she migrated to Canada as a teen and eventually returned home where she established herself as a media personality, marketing agent, emcee and content creator.  She was known for pushing creative boundaries and being the first to do and say- from launching DJ competitions, to being a brand ambassador for a major local enterprise. She also made a name for herself by curating events that shone the spotlight on women and their achievements. In 2015, she created “767 Girls Rock” where she showcased young women who were thriving in the island.

After the Category 5 storm Hurricane Maria nearly decimated her island, a very pregnant Jael left again for Canada, this time determined to come full circle and further enhance her media related enterprises with the formal education and associated degree.  She blossomed at Ryerson University where she is currently studying Journalism.

She also created and launched her “Cacoa Tea with Jael Joseph” video cast and podcast, where she interviewed men and women from around the globe about their exploits in various sectors from music, to social work, to fashion and wellness.  In between airings of the show, she hosted events and even curated a talent showcase called “Our Online Open Mic” (OOOM) and “Jael Joseph Live” infomercials for companies looking for media exposure.

As an immigrant in a country with a very diverse population, and in the minority; it is sometimes difficult to find one’s footing.  Jael, along with other women from the Caribbean have found that they have had to adapt to their new environment and not the other way around.  Against this backdrop; and finding sparse, if any, mentions of the black island girl experience online, she decided to explore what being a Black island girl truly meant in her Capstone project for school.

“If we migrate to other parts of the world, we are sometimes forced or we feel kind of forced into a bottle. We are not entitled.”

As a result, she says, Black women from the Caribbean tend to be rather hesitant to step into the light of their own accomplishments.

“We are very passive about self-acknowledgement or self promotion.”

Thus, BlackIslandGirl.com was created to share their stories and their candid experiences as women of African descent.

“We will be showcasing the brave, the bold, the intellects, the innovators and touching on topics such as culture, sexuality, feminism, education, religion, gender and classicism influences- all of that.”

The website will have a feature story on a selected topic each month and from that story will flow weekly podcasts.  Her first story on the site is entitled “How Natural Hair Empowers Black Island Women” and delves into the psychosocial and financial effects on professional women of colour, who intentionally choose to sport their natural hair. The piece focused on women from Dominica, Barbados, the UK and Canada.

Speaking of Canada, Jael hopes to make a name for herself through this and other platforms.  She is the recipient of the 2019/2020 Faulhaber Communication Award (for female Ryerson students who have demonstrated focus and aspirations to become a senior leader in communications)-the first Black woman to do so. She is already making good use of her prize, having launched BIG with the winnings.

Jael is currently interning at “Race, Health and Happiness” a podcast hosted by Dr. Onye Norom, and is learning even more about the craft she loves. Jael, through the Canadian Association of Journalism, is also being mentored by Stephanie Hinds who is the producer of “The Social”  (the Canadian version of “The View”). She hopes that this experience will help her further fine tune her brand and set a strong foundation for her as a journalist in Canada.

“I hope that after graduation I will be able to find a home with an organisation who will not necessarily consider me  for a position because I’m the token Black person but will recognize my work, my efforts, my achievements and feel that I can bring a lot to the table as a woman and as a Black woman.”

And may we add, as a Black island girl.

Ayeola George is the Founder/CEO at On Target Communication.