“Copeland is a powerhouse, a superstar…”— ROLLING STONE 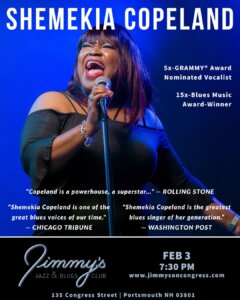 “Shemekia Copeland has established herself as one of the leading blues artists of our time.”— NPR MUSIC

“Shemekia Copeland is the greatest blues singer of her generation.”— WASHINGTON POST

“Shemekia Copeland is one of the great blues voices of our time.”— CHICAGO TRIBUNE

Since 1998, Critically Acclaimed & Award-Winning Blues Vocalist SHEMEKIA COPELAND has grown to become one of the most talented and passionate artists on today’s roots music scene. With each subsequent release, Copeland’s music has continued to grow, cementing her reputation as a singer who, according to NPR’s All Things Considered, “embodies the blues with her powerful vocal chops…” Copeland never holds back and her instantly recognizable voice—capable of being sultry, assertive and roaring—delivers every song with unparalleled honesty and passion.

Copeland also has a stunning 47 Blues Music Award Nominations – winning 15 of them. Highlights include:

Shemekia Copeland has sung with Eric Clapton, Bonnie Raitt, Keith Richards, Carlos Santana, James Cotton and many others. She opened for The Rolling Stones and entertained U.S. troops in Iraq and Kuwait. Jeff Beck calls her “amazing.” Santana says, “She’s incandescent…a diamond.” Copeland can even be heard hosting her own popular daily blues music radio show on SiriusXM’s Bluesville.