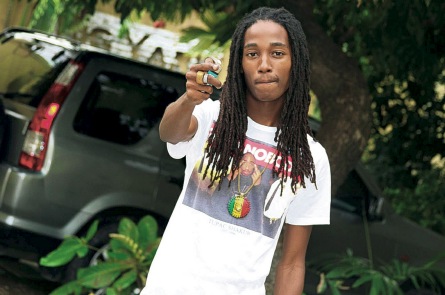 JUJU Blood, son of veteran reggae artiste Junior Reid, said he is trying to carve his own niche in the Jamaican music industry.

The 22-year-old singjay, whose given name is Junior Reid, has high hopes with Weh Mi Come From.

“The single speaks about the everyday struggles and perils of the lower income earners and less fortunate of our society … a topic that is sometimes swept under the carpet,” Juju Blood told the Jamaica Observer.

Weh Mi Come From is one of seven on Juju’s upcoming EP, The Young Veteran, which will be released next month.

A past student of Jamaica College, Juju Blood officially began his career in 2008 with the single Come My Way. Other singles include Some Bwoy, See Me a Rise and Leave You Lonely.

“I love old school and authentic reggae music, so aside from my father, one will find me listening to artistes like Black Uhuru and I Wayne among others.

He is currently signed to Money Green Productions which is a subsidiary of Junior Reid’s JR Records.

For the original report go to http://www.jamaicaobserver.com/entertainment/Juju-Blood-carving-his-niche_15387101