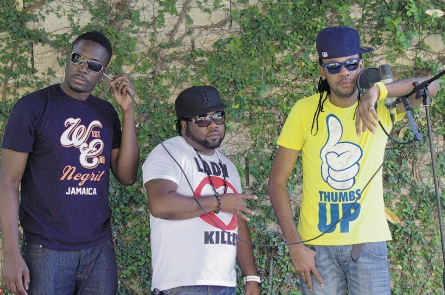 They were hailed as the wonder boys of dancehall 15 years ago, producing a number of hit songs for dancehall’s elite.

Ward 21, known for hard-hitting songs like Capelton’s Slew Dem and Wayne Marshall and Bounty Killer’s When The Smoke Clears, is back in the game with a new ‘riddim’ called the Dutty Fowl.

According to group member Kunley McCarthy, the beat marks the beginning of their BBG (Bada Bad Gyal) movement.

“This riddim features only artistes from our camp including Timberlee, Point O, Marcy Chin and Dee Wunn,” he said.

“For us, everything we do is about producing authentic dancehall, we do not want anything to be watered down,” McCarthy added. “Dancehall is about uptempo beats because Jamaicans love to dance, and right now we need music we can dance to.”

The 38-year-old McCarthy, Andre ‘Suku’ Gray and Mark ‘Meandawg’ Henry are the current members of Ward 21. Ranaldo ‘Rumblood’ Evans, the other original member, left the fold in 2008.

After an extended absence from the dancehall scene, how difficult will it be for Ward 21 to make a successful comeback?

“Nowadays, getting a breakthrough riddim depends on a producer’s relationship with a disc jockey and not necessarily the quality of the music,” McCarthy told Splash.

He also argued that the quality of music production has declined.

“Some of the modern day producers are self-taught. Back in the days we had tutors like King Jammys who taught us a lot.”

Producer King Jammys (Lloyd James) mentored Ward 21 at his famed studio in Waterhouse. They were also selectors for his sound system.

In 1998, McCarthy, Gray, Henry and Evans got their breakthrough with the Bada Bada riddim which featured songs by Beenie Man, Elephant Man and Chuck Fenda.

Although Ward 21’s focus was producing, they did well as performers, topping local charts with songs like Haters, Judgement Day and Blood Stain.

Songs on the Dutty Fowl, which includes Duppy by Timberlee and Dog Friend Dem by LOC and Ward 21, have been released.

For the original report go to http://www.jamaicaobserver.com/entertainment/Back-on-Ward-21_15362388