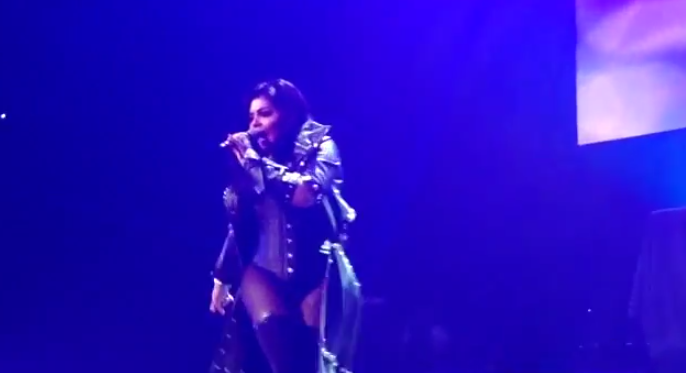 Hip-hop royalty is a coveted position. Ever since Kendrick Lamar claimed he was the King of New York, the post-“Control” era has got the game shaken up. MCs are now firing back with every opportunity to prove him wrong. Meek Mill did in Philadelphia when he closed out Power 99’s annual concert  by tweeting, “I cheated with the home court advantage lol @kendricklamar.” In similar fashion, Fabolous wasn’t taking the words to “Control” lightly. “All that shit about Kendrick being king?” Fab freestyled during his set at last night’s Powerhouse 2013. “We all know the kings come from Brooklyn.” After all, this was BK, where its other hometown hero Jay Z has cemented himself in rap’s upper echelon. So, of course, NY’s elite didn’t care if Kendrick was in the back. This was a time and place to spit some truth.

Power 105.1’s Powerhouse 2013 is the equivalent to Hot 97’s Summer Jam, which finds a superstar lineup and surprise guests packed into a extended time frame. The warm-up began with sets from Big Sean and K. Michelle, who both received loud pops despite being at opposite spectrums in hip-hop/R&B. The former kicked things off with hisHall of Fame single “Beware,” and followed that with his verse from “Don’t Like.” “We are not one and the same, nigga I’m fucking insane, fuck is you saying?” he shouted, and the eclectic crowd responded even louder. The latter took her rebellious soul to the Barclays for the first time, enticing fans with “My Life” and “Can’t Raise A Man.”

In the spirit of competition, DJ Self and DJ Envy took the stage before Meek Mill’s set for a battle of the boroughs. Self, who represents BK, and Envy, who holds down Queens, hit the crowd with back-to-back records from 50 Cent, Waka Flocka Flame and Hov. Showmanship became a reoccurring theme of the night as Meek came on minutes later in a black tee and gold chains to display his obvious star power. He turned things up with  “Dreams And Nightmares (Intro)” and kept the crowd on their feet with familiar tracks “House Party” and “Ima Boss.” And then it was time for the first wave of surprise guests: Jadakiss and Guordan Banks for “Heaven Or Hell,” Queens own’s SBOE for a brief set, and Nicki Minaj. After Nicki did her verse on “Dope Dealer,” she wasn’t ready to go home quite yet. The Barbz were treated with “I Wanna Be With You,” “Tap Out” and more that meant she was here to put on a show.

By the time A$AP Mob and Fabolous finished their sets, the crowd was anticipating 2 Chainz’s arrival. The DJ spun “I Luv Them Strippers” to set it off and the hits kept on coming. After a solid run of “Fork,” “Where U Been?,” “Feds Watching,” “Birthday Song” and “Used 2,” Tit had all levels of the Barclays mimicking his amazing dance arms. Then came Chainz infamous line—“I wanna say R.I.P. to this motherfucking stage!”—that led to his verse from Young Jeezy’s street single. Due to time constraints, Chainz was ordered to cut his set short at the height of intensity, which he made sure to point out after performing a little longer. “They want me to get off the stage. Here I come Pecas,” he told the EVP of Def Jam who was on stage. “I got nothing to lose!” Just when it seemed things couldn’t get crazier, 2 Chainz left with the rest of  “No Lie” blasting from the speakers and a sea of fans throwing dollar bills in the air.

After Trey Songz wooed the ladies with his sexually-charged songs, Kendrick Lamar and ScHoolboy Q were ready to close out the evening. At about 11:30 p.m., the crowd’s energy was winding down and didn’t look engaged during Q’s renditions of “Hands On The Wheel” and “Collard Greens.” However, Kendrick’s 40-minute set changed the mood of everyone in the place. People screamed “Yak, yak, yak!” during “m.A.A.d city.” They sung along to “Bitch, Don’t Kill My Vibe,” where SZA made an appearance to provide additional vocals on the hook. They also rapped every word to his “Fuckin’ Problems” verse, especially when Kendrick did it again a capella. At this point, Kendrick does have every reason to call himself king.

The crowd was left with the best for last. Although King Kendrick was in the building, he wanted to pay his respects to the city’s greatest MCs by bringing out the most “influential in the game.” In a rare moment, Lil Kim with Kendrick as her hype man performed classics “Get Money” and “All About The Benjamins.” The OG Queen didn’t miss a step, either. Those bangers were flawless.

“Bow down to the motherfuckin’ queen of Brooklyn!,” Kendrick shouted afterwards to a thunderous applause. Unlike Kendrick’s quest to crush his competition, he still knows where he stands among legends. It’s never lonely at the top.

For the original report go to http://www.xxlmag.com/lifestyle/2013/11/kendrick-lamar-lil-kim-are-hip-hops-royalty-at-powerhouse-2013/