BOJ says 4.3 Per Cent Inflation Rate in July Was Within Target Range 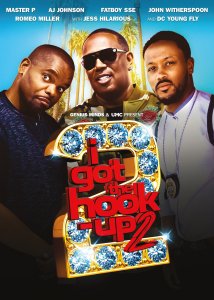 LOS ANGELES, Aug. 28, 2019 /PRNewswire/ — UMC (Urban Movie Channel) – the first and leading streaming service for Black film and television from AMC Networks’ RLJ Entertainment – will release Master P’s I Got the Hook-Up 2 on DVD and on Blu-ray on September 3, 2019. The film is the sequel to the popular 90’s classic. Executive produced by Master P (Percy Miller) and his son, Romeo Miller, the DVD will be available for an SRP of $27.97 and the Blu-ray for an SRP of $28.97. The DVD and Blu-ray also feature Deleted Scenes and Bloopers.

I Got the Hook-Up 2 was written by Michael Ballard (Chi-Raq the Series), Ramello Barnes (Note to Self), Corey Grant(Dysfunctional Friends), and Master P himself.  He also stars in the film along with Romeo, D.C. Young Fly (“Wild ‘N Out”), Anthony Johnson (Friday), Clifton Powell (Ray), Jess Hilarious (“Rel”) and Sheryl Underwood (“The Talk”).

In the original 1998 film, Master P and Anthony Johnson star as Black and Blue, two small-time scam artists who sell boom boxes and broken TVs from their van. When a shipment of cellular phones gets to them by mistake, it doesn’t take long before the FBI and crime bosses are after them. Reprising their roles, I Got the Hook-Up 2 picks up with Black and Blue running a local restaurant.

When an incident results in their restaurant being shut down, Black needs to find some cash – fast. He gets several boxes of stolen phones to sell but the boxes also have a stash of Molly that belongs to the Colombian cartel. Now, he has to sell the phones and repay the cartel before time runs out.