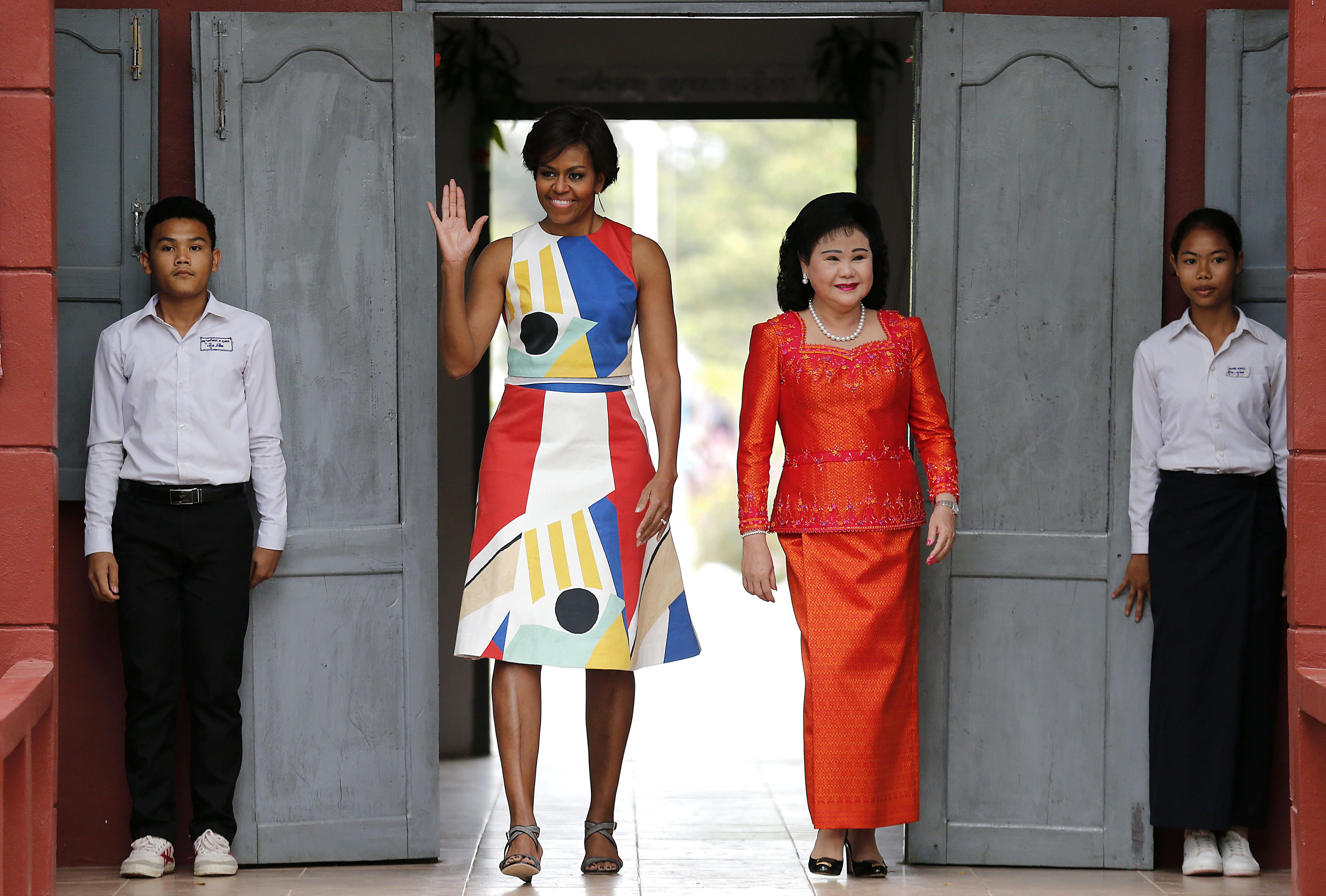 SIEM REAP, Cambodia _ Michelle Obama urged Cambodian students to finish their education and speak up to demand greater freedoms and more equality on a landmark visit to a Southeast Asian country that has been ruled by an authoritarian strongman for decades.

The U.S. first lady’s comments on Saturday did not explicitly criticize Cambodia’s human rights record or its government under Prime Minister Hun Sen. But she sent a pointed message, and one that she delivered seated beside Hun Sen’s wife, Bun Rany.

Human rights groups praised the remarks as a rare foray into foreign affairs for a first lady.

“Even though Mrs. Obama didn’t name names, it’s more than we have heard in a long time from a first lady on a foreign trip,” said Phil Robertson, deputy Asia director of Human Rights Watch. “Now it’s time for President Obama to state publicly what rights benchmarks he expects to see from Cambodia, and press Hun Sen to commit to it.”

Mrs. Obama wrapped up a five-day trip to Asia Sunday to promote the U.S.-led education initiative “Let Girls Learn,” which she and the president announced earlier this month. The community-based program, to be run by the Peace Corps, is meant to help millions of girls in the developing world stay in school and overcome economic or cultural pressures that force many to drop out.

“Let Girls Learn” is starting in 11 countries, including Cambodia. Mrs. Obama’s visit follows a three-day trip to Japan, which is helping to fund the project.

The trip gave the first lady, who is travelling without her husband, a chance to soak up some of Asia’s rich culture. In Japan, she visited Buddhist and Shinto shrines, and in Cambodia she travelled to Siem Reap, home to the famed Angkor Wat temple complex.

At a high school outside of Siem Reap, Mrs. Obama greeted students with a traditional gesture of hands pressed together and a head bow. She walked the compound’s dirt paths and then met with 10 girls who shared tales of rising early to feed their families and help with farming before heading off on long treks to school and studying late into the night.

“You are role models to the world,” said Mrs. Obama, seated on a wooden school chair beside the students and Cambodia’s first lady. Education brings empowerment, she added, and urged the teens to “finish your education and then follow your dreams.”

“Use your voices to advocate for good things _ whether it’s more education, better health care, more freedoms, more equality,” she said. “Not just here in Cambodia, not just here in Siem Reap, but in the world. I hope that you all will feel empowered to do that.”

As Mrs. Obama spoke, Bun Rany smiled and made no comment. However, she expressed Cambodia’s “full support” for the education initiative, and said the government was giving priority to female students for state scholarships.

Mrs. Obama’s trip marks the first by a sitting American first lady to Cambodia. Barack Obama became the first U.S. president to visit Cambodia in 2012, and pressed Hun Sen in private on a variety of human rights and political issues during a meeting that White House officials described as tense.

Hun Sen is one of the world’s longest-serving heads of state, and has been regularly criticized by political opponents and human rights groups for monopolizing power and brutally crushing dissent. His supporters say he has helped stabilize the country, which is still haunted by a 1970s genocide that saw nearly 2 million people die under the ultra-communist Khmer Rouge regime.

During its brutal reign, the Khmer Rouge closed schools and executed intellectuals among its many victims. Foreign aid and investment have helped the economy grow rapidly in the past decade, but the education system and overall development remain stunted.

Even today, most Cambodian children drop out of school. According to 2014 statistics from the Education Ministry, 95 per cent of children enter primary school, but only 20 per cent finish secondary school.

Poverty is the main problem, especially in rural areas, where families can’t afford the minimal costs of education and keep children home to help support the family, according to UNICEF.

After meeting students Saturday, Mrs. Obama spoke to a group of U.S. Peace Corps volunteers who will be running the global project and called on them to share American values with their students.

“Values like equality, inclusiveness, fairness, openness … aren’t just American values, we know this. They are universal human values,” she said. “When girls get educated, when they learn to read and write and think, that gives them the tools to speak up and talk about injustice and demand equal treatment. It helps them participate in the political life of their country and hold their leaders accountable.”

To wrap up the day, the first lady changed into casual clothes, sneakers and sunglasses and toured Angkor Wat, Cambodia’s grandest monument, built in the 12th century by the Khmer empire.

A tour guide led her to one of the area’s popular photo stops, where the temple’s iconic towers are mirrored in a reflecting pool.