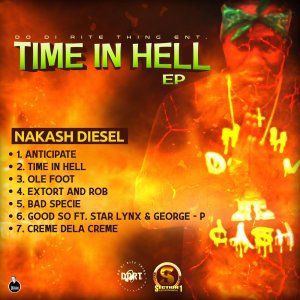 After recording several tracks during the pandemic, Nakash Diesel finally dropped his latest project, “Time In Hell“. The EP was produced by his management’s Do Di Rite Thing Entertainment label and released officially on August 26, 2022 via OneRPM. The project was done in collaboration with Section 1 Entertainment and Armzhouse Records.

Nakash Diesel and Do Di Rite Thing Entertainment is currently pushing the lead single and title track “Time In Hell” hard online via Ejor Media Group and PR, Lesley Hayles. It has already been featured on several entertainment websites and online newspapers including Vision Newspaper in Canada and Reggae Vibes in New York.

“Time In Hell” has also been placed in heavy rotation on radio stations in the United States and is picking up traction in Jamaica. Nakash Diesel and team are looking forward to this one helping to take off his career to higher heights.