JSIF to Implement Projects to Benefit Thousands of Youth 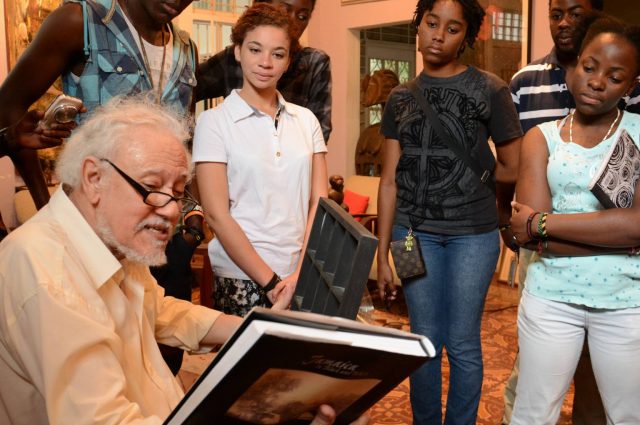 Photo: Dr. the Hon. David Boxer, O.J., with a group of students of the Edna Manley College of the Visual and Performing Arts.

The National Gallery of Jamaica has received the sad news of the passing of Dr the Hon. David Boxer, O.J., one of the Caribbean region’s most eminent and influential art scholars, artists and art collectors.

Dr Boxer served the National Gallery for some thirty-seven years, first as Director/Curator and from 1991 to 2013 as Chief Curator.

David Wayne Boxer was born in St. Andrew in 1946. A classically trained art historian, he attended Cornell University and then the Johns Hopkins University, where he wrote his doctoral dissertation on the early work of Francis Bacon.

He lectured at George Mason University before returning to Jamaica in 1975 to take up the position of Director/Curator of the recently established National Gallery of Jamaica.

It was David Boxer’s curatorial and scholarly mission to ensure that Jamaica had its own documented and art history, so that Jamaican art could assert its rightful place within the broader context of world art.

He started this process in the mid-1970s with several exhibitions that challenged previous understandings about Jamaican art and articulated a new, comprehensive art-historical narrative that continues to be the standard in the field today.

David Boxer’s first exhibition for the National Gallery, Five Centuries of Art in Jamaica(1975) challenged the view that what could rightly be called Jamaican art started with the nationalist unrest of 1938 and argued that art in Jamaica had a much longer history, with which modern Jamaican art existed in dialogue.

The second such exhibition The Formative Years: Art in Jamaica 1922-1940 (1978) examined the emergence of modern, nationalist art in Jamaica and identified Edna Manley’s Beadseller (1922) as its symbolic starting point.

The third and perhaps most radical element of Boxer’s art history of Jamaica was articulated with The Intuitive Eye (1979) exhibition, in which he placed the self-taught, popular artists he designed as Intuitives at the centre of the national canon.

This art- historical narrative was consolidated with the Jamaican Art 1922-1982 exhibition for the Smithsonian in 1983 and also became the basis for the National Gallery’s first permanent exhibition when the Gallery moved to the Roy West building that same year.

Many other memorable exhibitions followed, with more than fifty curated by David Boxer himself. The major retrospectives he curated, such as Edna Manley: Sculptor in 1990 and Barrington

Watson: A Retrospective in 2012, stand out as landmarks in the National Gallery’s exhibition history and deepened the scholarship of Jamaican art. Recurrent exhibitions such as the Annual National, which was inaugurated in 1977, and, its successor since 2002, the National Biennial provided an important avenue for the national exposure of many artists, new and established, and contributed actively to the development of art in Jamaica.

David Boxer’s vision of Jamaican art also guided the development of the National Gallery’s permanent collection, which has grown from some 230 works of art in 1974 to more than 2,000 works today, and provides an encyclopaedic overview of Jamaican art from the Taino to the present day, as well as a small international collection.

He brokered several major donations to the collection that filled important gaps, such as the A.D. Scott Collection in 1989 and the Aaron and Marjorie Matalon Collection in 1999, and he also developed specialized collections within the National Gallery’s collection dedicated to the work of Mallica “Kapo” Reynolds and Edna Manley.

David Boxer was one of the leading art scholars in the Caribbean region and arguably the most noted authority on Jamaican art, particularly the work of Edna Manley, Intuitive art and early Jamaican photography.

His publications record is substantial and includes several books: a major Edna Manley monograph in 1990, Modern Jamaican Art in 1998, and Jamaica in Black and White in 2013, which was the first major book on early Jamaican photography and which he co-authored with Edward Lucie-Smith. Most recently, he contributed the main research essay to the catalogue of John Dunkley: Neither Day nor Night, a major survey of the paintings and sculptures of the Intuitive master John Dunkley, which opened to the public on May 26, two days before his passing, at the Perez Art Museum in Miami. He also served as curatorial advisor to this important exhibition.

David Boxer’s work as a curator and scholar existed in close dialogue with his work as an artist and a private collector. He was self-taught as an artist and his artistic work was infused with art-historical, literary and visual culture references, which he used to comment on issues such as the violence of colonization and slavery, and the existential anxieties of modern life.

Boxer worked in a variety of media: painting, collage, print, and assemblage, and he was one of the pioneers in the field of installation and video art in Jamaica. As a private collector, David Boxer amassed one of the most comprehensive collections of Jamaican art, photography, and furniture, as well as a fine collection of rare art books.

The Board and Staff of the National offer their sincere condolences to the family and friends of Dr. the Hon. David Boxer, O.J. His contribution to the visual arts of Jamaica and the broader Caribbean is beyond measure and leaves an important, foundational legacy for the National Gallery and the Jamaican artistic community to build on in the future.

A public condolence book will be available for signing at the National Gallery from Wednesday, May 30.