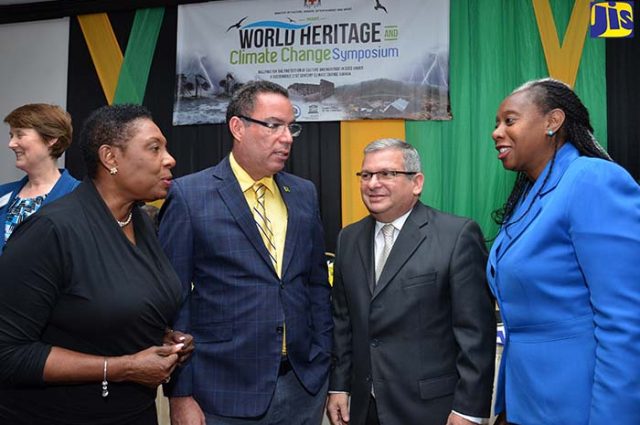 Photo: Minister of Culture, Gender, Entertainment and Sport, Hon. Olivia Grange (left), in conversation with (from second left): Minister without Portfolio in the Ministry of Economic Growth and Job Creation, Hon. Daryl Vaz; Cuba’s Ambassador to Jamaica, Bernardo Guanche Hernandez and Chairman, Culture Advisory Committee, Jamaica National Commission for the United Nations Educational, Scientific and Cultural Organization (UNESCO), Laleta Davis-Mattis. Occasion was the opening of the World Heritage and Climate Change symposium at the Jamaica Pegasus hotel in New Kingston on May 29.

Minister without Portfolio in the Ministry of Economic Growth and Job Creation, Hon. Daryl Vaz, says that over the next three to five years, the Government will be implementing several strategies towards the protection of the country’s wetlands.

Among the strategies, he said, is the implementation of a National Strategy for Biodiversity Conservation, supported by a national programme to enhance and protect the country’s biodiversity and wildlife.

“These wetlands, like so many other natural resources, have enormous potential, and we have set the framework for their sustainable use,” Mr. Vaz noted.

He was speaking at the opening of the World Heritage and Climate Change symposium, held at The Jamaica Pegasus hotel in New Kingston on May 29.

In addition, the Government will seek to complete the National Biosafety Policy to manage the risks and threats to biodiversity, human, plant and animal health as well as the socio-economic consequences of introducing genetically modified organisms and their derivatives into the environment.

“We have prepared, with the support of the World Bank, the National Guidelines on Coastal Management and Beach Restoration. This document, along with a Coastal Risk Atlas, to be developed this year, will be used to support and inform decisions with respect to developments within coastal areas,” Mr. Vaz said.

He added that the Government will develop and implement a Coastal Response Strategy and implement activities for the improvement of coastal ecosystems such as coral reefs, mangroves and seagrasses.

The Minister also noted that the Government has received funding from the World Bank Programme on Forests (PROFOR) to implement a project aimed at “assessing the economic valuation of coastal protection services provided by mangroves in Jamaica”.

“The grant is linked to the ongoing Jamaica Disaster Vulnerability Reduction Project, which focuses on enhancing the climate and disaster resilience of key infrastructure and the country’s disaster response capacity,” Mr. Vaz explained.

He noted that this activity will be led by the National Environment and Planning Agency (NEPA) and will support the Government’s thrust to promote cost-effective coastal protection measures through mangrove ecosystems enhancement.

Jamaica is home to more than 8,000 species of plants and animals and is ranked fifth among the islands around the world in terms of endemic plant life.

The country is also home to several wetlands, four of which are recognised under the Ramsar Convention on Wetlands and are part of the global network of more than 2,200 Wetlands of International Importance that are used and managed sustainably.