Despite the high cost of living and rising inflation the Office Of Utilities Regulations (OUR) has seen it fit to grant a massive 12 percent water and sewer rate increase on the already overburdened consumers in Jamaica. Our sources have told Vision newspaper that this application for a Rate increase dates back to 2019.  Then in 2020 the pandemic came on us so this application was put on hold. 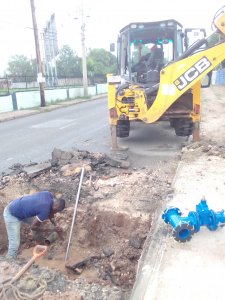 Backhoe in place which is used to excavate roadway to allow space for the installation of connector to lead water to customer. Workmen seen doing the preparatory work.

This rate increase comes into effect on May 1, 2022.  Sewer rates automatically go up when water rates are increased. Sewer rates are charged to those customers who are connected to or whose premises are in close proximity to a sewer connection. Sewer ensure that underground aquifers are not unduly contaminated by waste matter.  Tile fields are used instead of pits.  In a nutshell the sun is used to purify the watery portion of the contents from aka waste water.

President Mark Barnett, of the NWC was reacting to the 12 percent increase in rates in a radio interview and said inter alia:

“The average customer will see an actual average of 3% increase. For example a customer who uses 14 cubic metre which is say $6,022. 00 will pay an increase of $6,254.90 cents.  I appeal to delinquent customers to pay their bills in full.  So far only about 50 percent of customers pay in full and on time.  It is the base rate of PAM which will be increased.  The increase is in accordance with the Consumer Price Index (CPI).  This increase is a cost recovery only.  We as a Commission will intensify our collection efforts.”

So concluded the NWC president in a radio interview.

Pits are dug in neighborhoods where sewer lines are not in place.  The installation of sewer mains are very expensive capital works as roadways have to  be dug up and any faults like broken of clogged mains have to be cleared by specialized equipment.  Sewer mains also allow for more density per square mile/kilometres as it relates to the  building of apartments, office blocks and townhouses. In short more persons can live in a smaller geographic space as their waste is channeled to a central main which leads same away to be processed.

It is unfortunate that at this crucial time with inflation and other rise in prices that the Regulators have seen it fit to increase rates.  The Commission has seen in recent times an improvement in it’s bottom line. It is a fact that rising electric costs, theft of water, and uncollectible bills,  have negatively impacted the company. The (PAM) Price Adjustment Mechanism is being activated and the Commission has no control over these increased costs to consumers.

In Jamaica the NWC which is Government owned is a monopoly in most sections of the Island. They are producers of about 80 plus percent of all potable water used by consumers. The rates are considered to be relatively cheap when compared to other utilities.  This does not mean it is still affordable to the average working class person.

Conservation has to be practiced to save money so as to fight back.