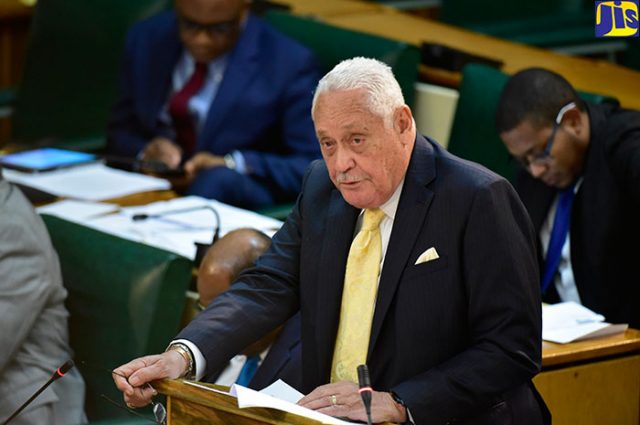 Minister of Transport and Mining, Hon. Mike Henry, closes the debate on the Road Traffic Bill in the House of Representatives on Tuesday (February 6).

The new Road Traffic Bill, which will repeal and replace the existing 1938 Act, was passed in the House of Representatives on Tuesday (February 6).

The legislation, piloted by Minister of Transport and Mining, Hon. Mike Henry, was approved with 131 amendments. It will establish new offences, as well as provide increased penalties for breaches.

Among the features are: a restriction on handheld devices; and a requirement for drivers to have a licence in their possession while operating a vehicle.

Offences under the Bill include: driving without required motor vehicle insurance coverage ($20,000); driving a motor vehicle without being the holder of a permit or driver’s licence ($40,000); failure of driver to obey traffic light ($24,000); loud noises within silence zones and failure to wear a protective helmet ($5,000); failure to comply with traffic signs ($10,000); and failure to stop at pedestrian crossings ($12,000).

Minister Henry hailed the support from both sides of the Lower House for the legislation, which, he pointed out, is intended to reduce injuries and loss of life on the nation’s roads.

“We will be able to reduce the injuries or better yet, eliminate them. We would save the health sector millions of dollars and make greater contributions to economic growth and development, with less grief on the road,” he said.

The Bill proposes that acceptable alcohol levels shall not exceed 0.02 per cent for regular drivers.

Drugs, other than alcohol, which are now not included, are intended to be provided for with the appropriate test and thresholds established in the Regulations.

“The maximum quantities of alcohol and other drugs that are to be included in the Regulations will be provided by the Minister of Health,” Minister Henry said.

The legislation will now go to the Senate where it is anticipated that its passage will receive the same level of support that was received in the Lower House.

Following its passage in the Senate, it will then be sent to the Governor-General for assent, after which it will be gazetted and passed into law.

The Transport Ministry is now putting the final touches to an islandwide public education campaign that will accompany the new Road Traffic Act.