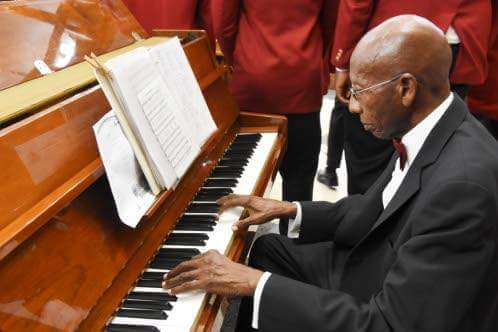 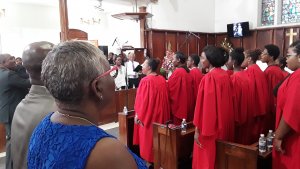 Photo caption: University Singers in red, as they performed at Dorraine Samuel’s funeral earlier 2019 at the UWI Chapel under their director Mr. Halliburton. Dennie/photo.

Members of the music industry are saddened at the passing of a composer, director and music teacher in the person of Noel Dexter 80. The former conductor of the University Singers a noted choral group has left an inedible mark on the annals of our regions musical history. 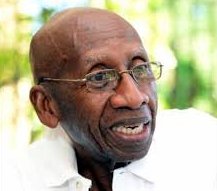 Dexter for more than six decades penned world famous music that will leave an enviable legacy on the footprints of the sands of time. “Oh praise He the Lord” is one of Dexter’s more popular songs/hymns written by this noted composer.
To his family we say chins up … to the University Singers we say cheer up.

On a personal note Noel Dexter was known by me personally. As a choistor on my church choir we use Dexter’s compositions regularly. Gone too soon.