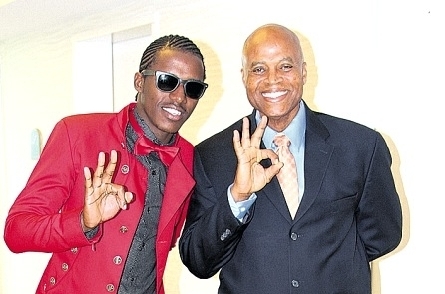 IN the mid-1970s, Donovan Germain donned a jacket and tie and headed to his nine-to-five job on Wall Street where he worked as a junior accountant at a brokerage firm.

It was not long before he got bored.

“I never love the corporate world… the jacket and tie thing wasn’t for me,” he told the Sunday Observer.

He entered the music business as a producer with Germain’s Revolutionary Records, but did not hit his stride until 1988 when he returned to Jamaica and launched Penthouse Records.

This year, Germain went into his archives and selected 47 songs which will be released on January 14, 2014 by VP Records as Penthouse Records 25 Years — The Journey Continues.

The set contains many of the songs that made the label a powerhouse during the 1990s, a fruitful period for dancehall music. There are others not as well known.

“There have been other Penthouse anthologies, so I didn’t want to duplicate the songs. Some of the songs on this album never got any great love and they are personal favourites,” said Germain.

Among those tracks is Nigger Mikey’s Ting Deh, Penthouse’s first release in 1988. Other rarely heard numbers are Tom’s Diner

by deejay duo Michigan and Smiley and Brought Me Love, which was done by Dennis Brown.

The package, however, is dominated by hits from artistes who helped make Penthouse a leading player in the 1990s. They include Buju Banton (Oh God of My Salvation, No Respect), Wayne Wonder (I’d Die Without You), Beres Hammond (Love Mi Haffi Get, Who Say), and Cutty Ranks (Pon Mi Nozzle).

Two interesting songs come from singer Garnet Silk, the unofficial leader of the roots-reggae revival of the 1990s. They are a remix of Everything I Got, one of his biggest hits, and the un-released My Favourite Song.

Silk died in December, 1994 at age 28. Germain remembers the lanky Rastafarian as “very committed, believed in his religion. He wasn’t a ‘wagonist'”.

After leaving his Wall Street job, Germain’s first production was singer Joy White’s Sentimental Reasons. He had several hit songs with Germain’s Revolutionary Records including Heads of Government by the Mighty Diamonds and Freddie McGregor’s Just Don’t Want to Be Lonely, which did well in the United Kingdom.

It was not until he returned to Jamaica in 1988 and started Penthouse that Germain made his mark as a producer. The company not only nurtured artistes but was a platform for engineers like the Kelly brothers, Tony and Dave, who went on to create successful careers as producers.

For the original report go to http://www.jamaicaobserver.com/entertainment/Penthouse-marks-25-years_15506135