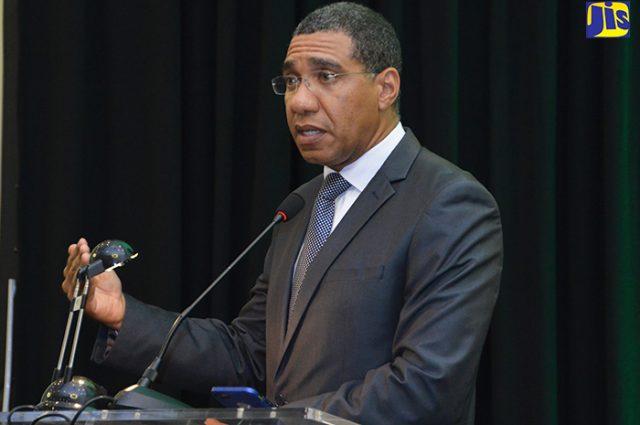 Prime Minister, the Most Hon. Andrew Holness, addressing stakeholders during a function at the Jewel Grande Hotel in Rose Hall, St. James, on Saturday, April 28.

Prime Minister, the Most Hon. Andrew Holness, says that the Government will continue to give the Tourism Ministry and its agencies all the support they need in order to fully maximise the sector’s potential.

He said that while the local industry has been performing exceptionally well, “much, much more can be done”.

“The Caribbean region recorded 50 million visitors last year. The international tourism movement is about 1.3 billion, so we are not even getting one per cent of tourists from around the world. Much, much more can be done to bring tourists to our shores,” he argued.

“We can bring in much more revenues… much more visitors,” he added, while addressing a function at the Jewel Grande Hotel in Rose Hall, St. James, on April 28.

The Prime Minister said he is very happy with the aggressive approach being undertaken by the Tourism Ministry as it relates to venturing into new markets and also in giving brand Jamaica a high-profile presence on the world stage.

He noted that it is not just in the traditional markets of Canada, the United States, and Europe that “we are breaking new ground”, pointing out that “we have a concerted strategy” for the Latin American market, particularly in South and Central America.

“We are well on our way. If we can open up the markets of South America and Eastern Europe… and with China on the horizon… then easily we could have 10 million visitors,” he said.

The Prime Minister said he is confident in making that prediction, as the island’s allure is second to none, and when visitors think of a Caribbean vacation, Jamaica is almost always at the top of any list.

“This is why the Ministry of Tourism has my full support in beating down a path to the doors of the big markets… to bring them (visitors) here to Jamaica,” he said.