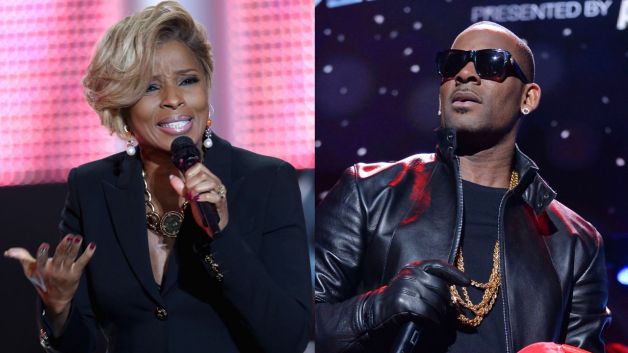 The self-minted “King of R&B” didn’t drop too many details on the jaunt, which will predate his forthcoming Black Panties tour. “We’re working on the Black Panties tour, but before we get into that I’m doing a King and Queen tour with Mary J,” the 48-year-old revealed, adding, “We gon’ warm it up first.”

Later in the interview, the singer/songwriter/musician talked about collaborating with fellow multi-talent Lady Gaga for “Do What U Want.” Teaming with Gaga was like meeting his “match,” both “sexually” and “musically,” Kelly recalled. “When I say ‘sexually,’ I mean she was very sexy, and she was always sexy before I met her,” he said of Gaga.

Gaga reached out to Kelly to record a feature on the song after attending one of his shows. “When she sent [‘Do What U Want’] to me it was different but it was hot,” explained Kelly. “So I got on there, murdered it … next thing you know we were doing a hot, hot, hot, blazing hot, video.”

The video has not been released yet, but the duo has translated the heat from their music into a couple of live sets. Last month, they mimicked intercourse (fully-clothed) on Saturday Night Live, and took a shot at Bill Clinton’s 15-year-old sex scandal at this year’s American Music Awards.

Though known for his explicit lyrics and performances, the Black Panties album is a rebirth of sorts the Chicago native said. “I’m doing a Benjamin Button right now, turning the clock back around and we gon’ start over again … I felt like R&B kinda had the flu a little bit [and] I’m tryna come save the day,” he asserted.

As Kelly attempts to musically turn back the hands of time, past allegations continue to haunt the father of two. Although acquitted in a 2008 child pornography case, a new exposé posted in theVillage Voice last week unearthed detailed reports of Kelly’s alleged sexual abuse of several teenage girls over the years, one of which was made to have an abortion, according to the story.

He has yet to directly address the newly revealed allegations.

For the original report go to http://www.bet.com/news/music/2013/12/24/r-kelly-announces-tour-with-mary-j-blige.html