Review Being Done on Role of Municipal Police 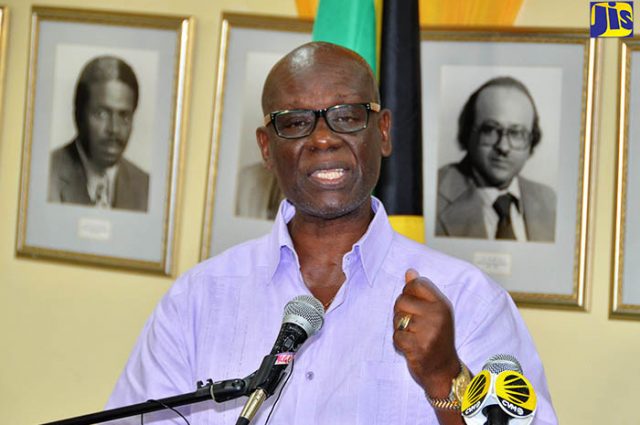 Minister of Local Government and Community Development, Hon. Desmond McKenzie, says a review is currently being undertaken on the role and function of Municipal Police personnel.

“We have put a stop on recruitment, for the time being, to reassess the present crop and to see how best they would fit into the new dispensation,” Mr. McKenzie said during his post-Sectoral Debate press conference, held at the Ministry’s Hagley Park Road offices, today (April 20).

Municipal Police officers support the activities of the local authorities by enforcing municipal laws and regulations, and maintaining public order, among other things.

Meanwhile, the Minister said Cabinet has accepted the proposal for the new litter fines, being made under the Regulations of the National Solid Waste Management Act.

“But one of the concerns that the Cabinet has is how are we going to enforce these fines. Cabinet looked at all of the entities, including the Municipal Police. And that is why we are reassessing how they operate,” Mr. McKenzie noted.

The Minister said the Ministry has been having a series of meetings across the island with the Municipal Police Officers.

He pointed out that the issue of working conditions at some municipalities has been raised.

“One of the (other) challenges that they face is the level of indiscipline that exists in the society. Once we are satisfied with the new mechanisms that have been put in place, we will start the recruitment programme,” Mr. McKenzie said.

The local authorities are responsible for the administration, enforcement and compliance of civic and municipal laws, and regulations.

Effective adherence to those laws is essential in maintaining good public order, facilitating orderly development, preventing public nuisance, and enabling citizens to enjoy their civic rights and privileges in relative peace and safety.