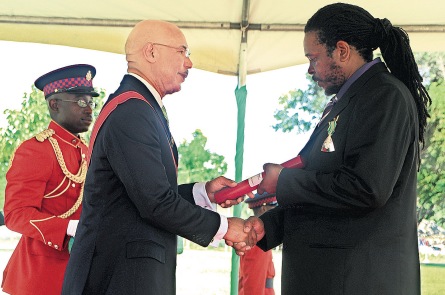 CLASSICAL pianist Orrett Rhoden had no intention of declining his national award. He admits using yesterday’s National Honours and Awards ceremony as an opportunity to reach the ear of Prime Minister Portia Simpson Miller.

Rhoden was present at King’s House to receive the Order of Distinction (commander class).

Two weeks ago, it emerged that Rhoden would not accept the award because of what he deemed a lack of support for classical music in Jamaica.

However, yesterday he explained that he used the opportunity to get the attention of the Prime Minister.

“I had tried on numerous occasions to get the attention of the prime minister but was unable,” he revealed. “I now look forward to working with her on the second staging of the of the Orrett Rhoden International Music Festival.”

The event will be staged at the University of the West Indies’ Mona chapel and the Mountambrin Theatre Gallery in Westmoreland on November 24 and December 1.

Rhoden says the event will offer a varied programme and feature classical pianists from Sweden, Greece, Russia, Canada and himself as well as cellist Stephen ‘Cat’ Coore of Third World.

“I want to put Jamaica on the map as it relates not just to reggae, but classical music as well.”

For the original report go to http://www.jamaicaobserver.com/entertainment/Rhoden-gets-Portia-s-ear_15300195