T&T to play Argentina in June

Mavado – My Own [New Music] 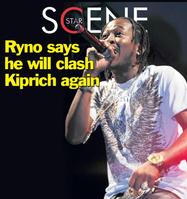 In a shocking turn of events, Ryno, the former protégé of Vybz Kartel, released an onslaught of songs against Kiprich at Sting 30, ridding him of his title as Sting Clash King and walked away US$30,000 richer.

Though refusing to comment much about his prize money, Ryno told THE STAR that he would be going back to Sting for one last showdown, but does not want his career to be based solely on clashes.

a nuh buck up

“Mi a guh clash Kiprich at Sting this year just fi show people say a nuh buck ups mek mi win him. Den mi a go give him back the belt and cut. Mi nuh really want my career deh pon the clash ting. Mi a guh just go Sting and lyrically buss off him head again and then hand over the belt,” he told THE STAR.

He added that since the clash, he has also been receiving countless calls for bookings, both locally and abroad.

“Mi a get whole heap a calls from all bout. But it’s not like Ryno wasn’t travelling before because touring never stops, but now, mi a get more calls for more shows since Sting,” he said.

The artiste will be performing in Montego Bay in February, after which he will depart the island for a series of shows. He is also looking forward to his European tour later this year.

Adding his name to the list of artistes who believe they are not getting their fair share of airplay, Ryno told THE STAR that his music is more appreciated outside of Jamaica.

“Last year, mi go Trinidad, Barbados, St Vincent and several other countries. A just Jamaica a hold on pon me. Mi nah get played the right way. Mi have hits elsewhere, but when mi deh Jamaica, a different ting. A just Jamaica did a hold off mi ting,” he stated.

Ryno is currently working on projects for Seanizzle and Cashflow and recently shot a video for his latest single titled I’m Blessed.

For the original report go to http://jamaica-star.com/thestar/20140108/ent/ent1.html