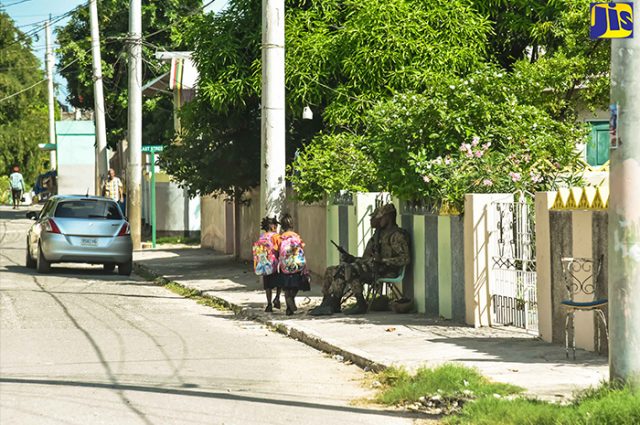 Children on their way home from school in the community of Denham Town in Western Kingston on Wednesday (October 18). Prime Minister, the Most Hon. Andrew Holness on Tuesday (October 17) declared Denham Town the second Zone of Special Operations under the Law Reform (Zones of Special Operations) (Special Security and Community Development Measures) Act.

The Joint Command of the Zones of Special Operations (ZOSOs) Communications Unit is reporting early success in the security forces’ engagements in Denham Town, West Kingston, which they say are going well since commencing on October 17.

Head of Corporate Communications at the Jamaica Constabulary Force (JCF), Superintendent Stephanie Lindsay, who is jointly in charge of the Unit, told JIS News during a press briefing in the community on Thursday (October 19) that 34 rounds of ammunition were recovered during an operation earlier in the day.

Meanwhile, her Jamaica Defence Force (JDF) counterpart, Civil Military Cooperation and Media Affairs Officer, Major Basil Jarrett, advised that intelligence efforts are being intensified as the security forces move to ferret out wanted persons who they understand have taken refuge in neighbouring communities.

Superintendent Lindsay, while acknowledging inconveniences to residents that would arise, particularly at checkpoints, urged persons to exercise patience during the course of the operations.

She reiterated the importance of persons having valid identification to, as best as possible, facilitate their seamless movement in, out and across the community by the security forces, subject to their discretion.

Meanwhile, Superintendent Lindsay advised that restrictions have been placed on the staging of fetes and other social events in Denham Town, adding that residents are required to be off the streets by 7:00 p.m.

“We will not encourage any gathering or parties during the curfew. We want to create an atmosphere… for people to enjoy peace (and to) give the residents an opportunity to have (a) nightlife,” she said.

The senior officer also used the opportunity to again discourage youth from joining gangs and resorting to a life of crime.

“We want them to see another alternative. We want to build the resilience of the people, where they can resist the criminals, and (align with) the security forces,” she added.

For his part, Major Jarrett maintains that the ZOSO will bring “huge benefits” to the communities where they are implemented, as criminals will be driven out, while noting that the residents’ support for the operations continues to be “overwhelming”.

Additionally, he said the social interventions to follow “will be a welcome change for the community” pointing out that inconveniences residents experience would be “a small price” for the gains to come.

Denham Town is the second community to be declared a ZOSO by Prime Minister, the Most Hon. Andrew Holness, under the Law Reform (Zones of Special Operations) (Special Security and Community Development Measures) Act, following Mount Salem in St. James in September.