VYBZ KARTEL FIGHTS BACK! REFUSES TO BE SILENCED DESPITE EFFORTS TO MUZZLE HIM 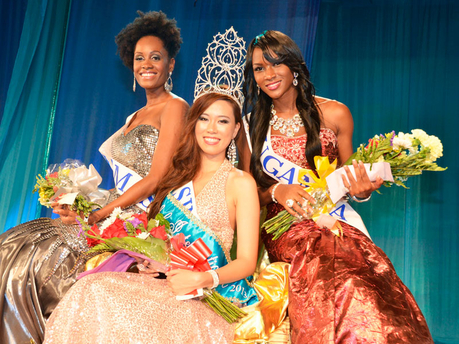 An environmentalist out of Asia has copped the Miss Global International 2013 Pageant.

Twenty-three-year-old Jody Liu, representing Singapore not only walked away with the coveted crown, but US$5,000 in prize money, courtesy of the Commonwealth Group of Canada, the sectional prize for ‘Most Aware’ and a host of other prizes.

Liu outclassed 31 other contestants, including Miss Global Jamaica at the grand coronation at the Sunset Beach Resort, Spa and Waterpark in MontegoBay on Saturday night.

Wildgoose was selected by her peers as the ‘Most Congenial’ contestant.

The other women who got the attention of the judges, headed by former MissJamaica World, Joan Crawford, were Miss USA, Phanith Sovann whose talent performance had the audience in awe; Miss Haiti, Marie Exume, whose infectious smile won her Best Smile, and Miss Jamaica, Roshelle McKinley, ‘Best Figure’.

The winner, who was literally a dark horse throughout the pageant, earned the audience’s interest when she answered her interview question with clear intellectual prowess.

A lover of preserving the earth, Liu said the legacy she wants to leave for future generations was one that places emphasis on the importance of the environment and the impact of global warming.

“I will use this title to carry out my mission to educate people, not only about environmental issues, but also to inspire them to inculcate these habits into everyday life. We only have one earth,” she stated after winning the crown.

No stranger to beauty pageants, this is the queen’s third attempt at winning a crown. She has entered Miss Earth and Miss Universe in the past.

“The reason I joined Miss Global is because it is a different pageant. It places a heavy emphasis on charity and serving the community. So when I heard about it, I wanted to do that. I felt it was a good platform for me,” she explained.

Liu says she will use her platform to show those with dreams that one can be a woman with a mission.

“To me, it is not about winning the crown itself. To me, it is about sharing this experience with everyone and if I could win this crown like I say, I want to use this crown to carry out my life’s mission.”

Second runner-up Miss Uganda, who travelled over 30 hours to get to Jamaica was excited about being in the top five.

“I consider it a blessing for me and my country,” she stated, adding that there were some very qualified women in the pageant.

Miss Global International will be held in Canada in 2014 under the umbrella of its headline sponsor, the Commonwealth Group of Canada.

This year, the pageant was sponsored in a big way by Sunset Beach Resort, Spa and Waterpark, Tropical Tours, RIU Resorts, and a host of other supporters.

For the original report go to http://jamaica-gleaner.com/gleaner/20130930/ent/ent1.html