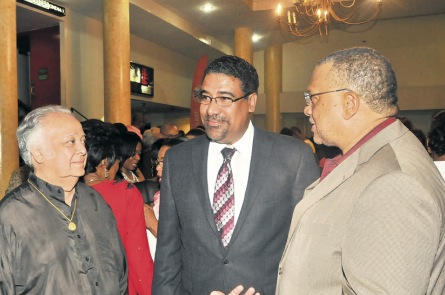 THERE are plans for Rex — The Renaissance Man, a documentary about cultural icon Rex Nettleford, to have an overseas run.

The 45-minute film, which was part funded by the Rex Nettleford Foundation, premiered at the Carib Theatre in St Andrew last Thursday. Conceptualised and directed by film-maker Lennie Little-White, it will be shown in Montego Bay Thursday at the Palace Multiplex.

“It’s going to be shown in Trinidad and Tobago, Barbados, and the Eastern Caribbean as well as London, New York, Washington DC and Toronto,” said Elizabeth Buchanan-Hind, executive director of the Rex Nettleford Foundation.

She said ‘Rex’ will eventually make its way to local schools.

“It’s very important for it to be shown in schools as Professor Nettleford wanted students to know that their humble beginnings need not define their outcomes,” Buchanan-Hind said.

“It is based on what Professor [Nettleford] wanted and would be shown around the world,” she continued.

Dates will be finalised after the Montego Bay event.

Nettleford, who was born in Trelawny in 1933, left a rich legacy in the arts and academia. He co-founded the National Dance Theatre Company (NDTC), which celebrated its 50th anniversary last year and served as vice-chancellor of the University of the West Indies (UWI).

He died in February, 2010 while attending a conference in Washington DC.

Buchanan-Hind said the premiere was well-attended and went “beyond everyone’s expectation”.

“It was well received. People were happy with the film. Lennie Little-White did a fantastic job,” she said.

Government representatives, members of academia and arts attended the premiere.

For the original report go to http://www.jamaicaobserver.com/entertainment/Rex–goes-global_15158503