One Million Doses of COVID-19 Vaccines Administered in Jamaica

Orlando, Florida: As the world reopens with fans and music practitioners re-engaging with each other, many of Jamaica’s top performers have been busy across the United States performing for fans yet again.

Alkaline who is still unlocking new levels and basking in the success of yet another chart-topping Billboard album, will be making his debut headline appearance in Florida demonstrating why he holds the “Top Prize” and securing the keys to another city. 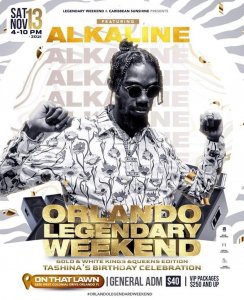 Reggae sensation Gyptian who is known for chart topping singles such as “Hold You”, “Nah Let Go” and “Wine Slow” will be representing for reggae lovers, while the Vendetta Boss Alkaline will give his fans an eclectic mix of rendition from his record-breaking catalog, unleashing a fiery set and once again silencing the naysayers. Dancehall Princess Tifa who is on her “The Legends Returns” tour, will also make an appearance representing for females and holding her own, rivaling her peers in a male dominated industry.

“Orlando’s Legendary Weekend is being touted as a legendary night of performances, capturing, and representing more than a decade of music from some of its frontrunners that has taken the genre beyond Jamaica’s shores and as Alkaline makes his debut headline performance in Orlando, I encourage everyone to make the necessary arrangements to be a part of a historic night” states Rickardo Shuzzr, entertainment publicist for Alkaline & Tifa.

Alkaline “Top Prize” album after its first initial week of sales and streams debuted at the #2 position on the Billboard Reggae Album charts; #1 on the US Current Reggae Sales chart; #56 on the US Top Current Albums Sales chart. The album also went on to securing the #19 position on the Heatseekers charts which highlights “Breaking and Entering” music, issued weekly by Billboard magazine and #39 on the publications Emerging Artiste Chart.

In recent years, the state of Florida has become home to some of Jamaica’s most iconic events, with the islands top act(s) performing for reggae-dancehall lovers to record breaking numbers. The iconic event will also see renowned DJs such as Foota Hype, DJ Norie, DJ Bama and Black Roses adding an authentic mix to the highly anticipated event.