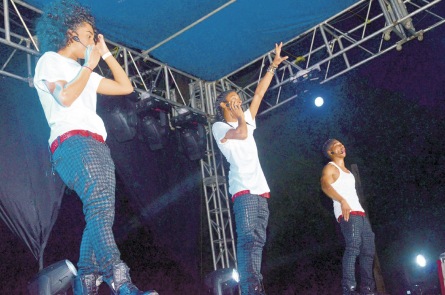 A LARGE crowd of star-struck teens showed up at the Liguanea Club in New Kingston Saturday to see American boy group Mindless Behavior.

Ray Ray, Princeton and Roc Royal had their fans thoroughly engrossed throughout their 90-minute performance.

Though lead singer Prodigy was a no-show, the screams were deafening as Mindless Behavior mimed the lyrics to Number One Girl, Future, Mrs Right, All Around The World, and Missing You.

Whilst attempting to interact with his audience, Roc Royal went too close to the stage and was almost dragged off by a group of exuberant girls.

The excitement continued following their set. Barriers were broken as most of the patrons in the VIP area dashed backstage, hoping to meet the show’s stars.

Security personnel were no match for the screaming teens who gathered at the staircase leading to the stage. A fight then broke out over Princeton’s Gucci jacket with the victor beating a hasty retreat for the venue’s exit.

Mindless Behavior were rushed into a waiting car and whisked away with their fans wildly in tow, beating on the vehicle’s doors and windows.

Jason Newman of promoters Young and In Charge said the concert lived up to expectations.

“One of the members didn’t make it but I did exactly what I said I would do and that was to bring in someone hip and trendy for the children and it worked well,” he told the Jamaica Observer.

For the original report go to http://www.jamaicaobserver.com/entertainment/Mindless–behavior–at-Liguanea-Club_15156629