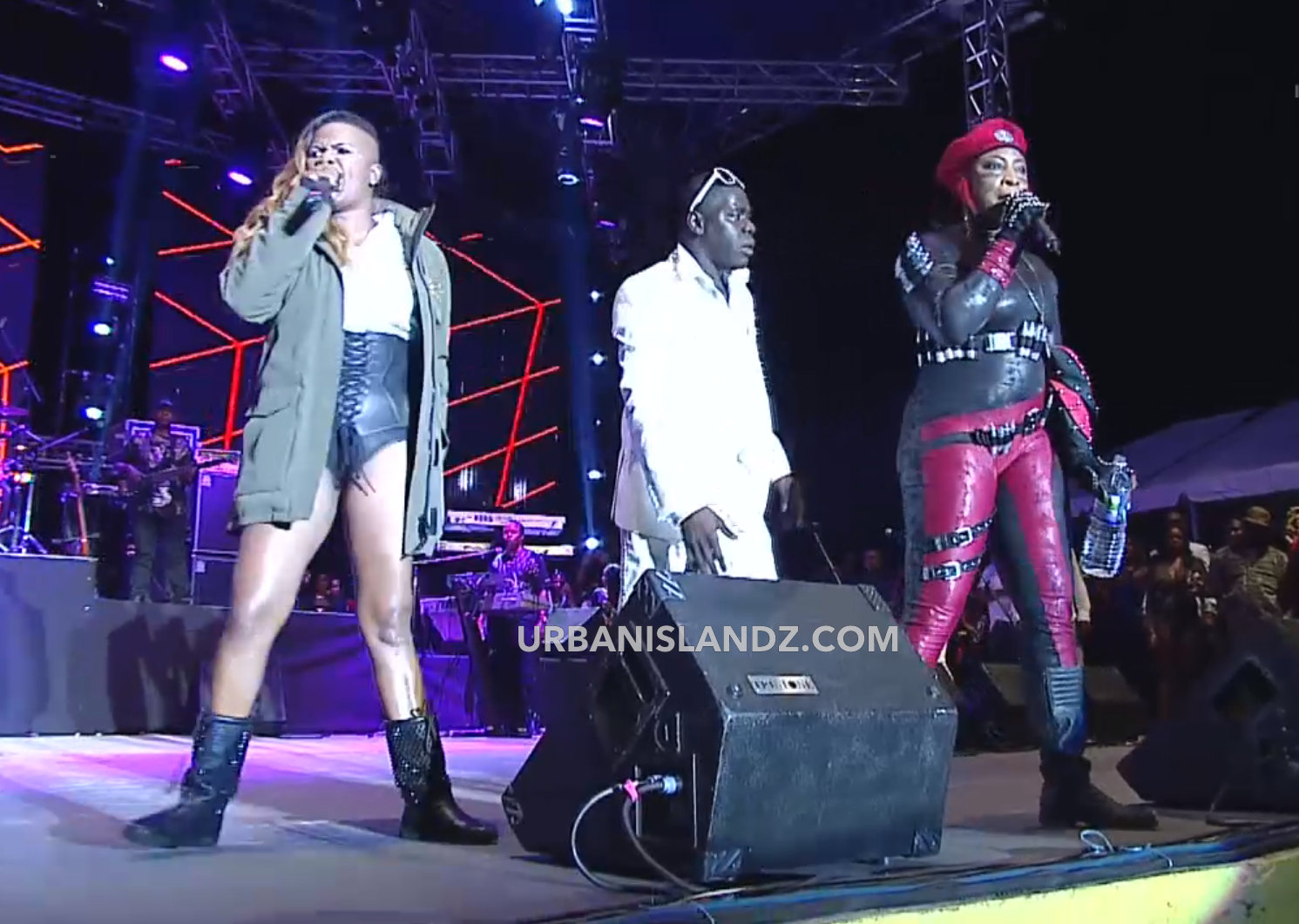 Sting 2013 got off to a great start on Thursday night, December 26, at Jamworld Portmore.

The MC is warming up the stage. The stage is well put together with great lightings. Several young and upcoming artists performed ahead of the big name acts.

Stylish performing now. Her set received an okay response from the audience.

Specialist is now performing. He is getting good response from the audience. Another artist from Downsound records joined him on stage.

Danielle D.I. now performing. Her body look banging. She got a good response from the audience.

She getting some more good reception from the audience.

Romain Virgo now performing. He got a great response from the crowd. Romain Virgo had the crowd singing word for word to his songs.

Wyclef Jean just took the stage. He is receiving a good performance from the crowd. He sings about free Vybz Kartel and free Buju Banton and the audience went wild.

Wyclef just made his way to the back of the venue after complaining about the response from the VIP audience.

Wyclef spin two Vybz Kartel on the table and got the biggest forward from the audience.

2 Chainz now on stage performing. Took him a few minutes to get on stage. He is going through a medley of some of his hits. He barely getting any response from the crowd.

Wyclef got the crowd riled up but 2 Chainz hardly getting any response.

2 Chainz got some forward from the crowd and did not want to leave the stage when his time was up.

Super Cat just take the stage. Super Cat got the full attention from the audience.

Super Cat little son just joined him on stage and he is now spitting lyrics.

Super Cat asked the audience if he should leave the stage and the crowd shout no.

Super Cat is still lyrical, he is getting some good response from the audience, especially the older folks.

Super Cat now giving the crowd some new songs from his growing catalog.

Lady Saw just took the stage. She got a good reception from the audience.

Lady Saw just brought Tyson Beckford and Maia Chung on stage to do “Heels On.”

Clash between Lady Saw and Macka Diamond about to go down.

Macka Diamond took the stage and drop two lyrics but Lady Saw is getting the most forward.

The two almost pop it off but MC Nuffy got between them.

Macka Diamond forgetting some of her lyrics.

Lady Saw declared the winner of the clash.

Tommy Lee just took the stage on a tall stool with two guys in demon masks.

Tommy Lee got a huge forward from the audience.

Tommy Lee just explained why he called himself Uncle Demon and say he is tired of getting blame for society’s problems.

Tommy Lee just told the audience about his car crash that left him with a broken leg.

Aidonia toom the stage. The JOP head going through a medley of his huge catalog.

Aidonia received a lot of forward from the audience

Beenie Man getting a hige forward, one of the biggest forwards we’ve seen all night.

D’Angel just joined Beenie Man on stage and give him a wine.

Beenie Man called out two kids on stage and they tore down the place.

Ninja Man now taking the stage with a long line of females.

Ninja Man spitting a lot of lyrics, taking shots at several other artists including Beenie Man and Bounty Killer.

D’Angel just took the stage to perform with Ninja Man.

D’Angel want to clash Ninja Man but asking Sting promoters to pay her.

D’Angel got pissed and left the stage.

Mavado just took the stage and got a massive forward.

Some Mavado fans in the crowd with some huge banners of the Gully Gad.

Both Gullyside artists left the stage and Mavado now performing by himself.

Mavado going through a medley of his huge catalog.

Mavado threw his shoe in the crowd and a male fan catch one pair but he star told him to give it to one of the females.

The crowd show a lot of love to the dancehall pioneers.

Isiah Laing says Elephant Man did not turn up for the show.

I-Wayne burning plenty fire. The reggae star going through a medley of his catalog.

I-Wayne just big up Vybz Kartel, calling him his brother from another mother.

The man from judgement yard is in control.

Sizzla burning out gays and he is going in.

A lot of fire blazing in the venue

The clash is about to start.

Ninja Man walk on the stage with a bag containing the clash money rumored to be US$30,000.

Kiprich just took the stage dressed in a military outfit.