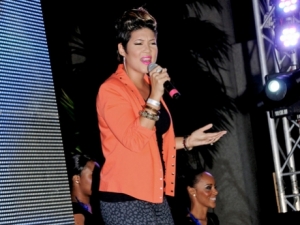 The Voice premiered its Battle rounds this week and Jamaican artiste Tessane Chin once again proved that she is a force to be reckoned with.

Performing a rendition of Emeli Sande’s Next To Me, both Chin and Donna Allen gave a chill-inducing performance which had the judges confused as to which member of Team Adam Levine should advance.

Judge Blake Shelton declared that Allen was the winner in his eyes, both Christina Aguilera and Cee- Lo disagreed, giving the nod to Chin.

With Adam left to declare the winner, both contestants looked visibly nervous as they awaited the verdict.

In the end, Chin walked away as the victor of the battle, much to the delight of the audience.

Tessanne’s husband, Michael Cuffe tweeted “@Words can’t express the pride I feel right now for Tessanne not only an amazing talent, but an amazing human being.”

Tessane also took to twitter to express her gratitude. “Just wanna say a big thank you to everyone again for tuning in but most of all @DonnaAllenMusic you’re amazing and I love you!.”

For the original report go to http://go-jamaica.com/news/read_article.php?id=48638