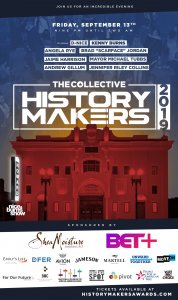 Presidential candidate Senator Cory Booker is slated to speak at this year’s awards reception for the second year in a row. Three-time Platinum Certified rapper and Houston, TX City Council hopeful, Brad “Scarface” Jordan is also set to participate. Other notable attendees and honorees include:

“The 2019 History Makers Awards will be an incredible night of celebration and hope as we seek to shine a spotlight on black excellence, both past and present,” said Quentin James, Founder and Executive Director of The Collective.

The 2019 History Makers Awards are being sponsored in part by Shea Moisture, BET+, Emily’s List, Onward Together, MoveOn, the National Museum of African American Music, Democrats for Education Reform, For Our Future, Tom Steyer 2020, People for the American Way, Pivot, The Gathering Spot, Black Millennial Convention and Vote Pro Choice.

Since 2016, The Collective has helped 54 black candidates get elected to local, state and federal office; raised over $7 million from grassroots, high net worth and institutional donors; directly and indirectly contributed, bundled and moved over $4M to support over 100 endorsed candidates, trained over 1,000 candidates and operatives and communicated to millions of people via television, radio and print media; and helped more than 30 candidates win primaries or general elections in the 2018 midterm elections.