Saints & Sinners was the #1 most-watched program in P18-49 and P2+ and second among HHs and P25-54 among all ad-supported cable in the delivery of African-Americans, Bounce’s target-audience, Sunday nights at 9:00 p.m. 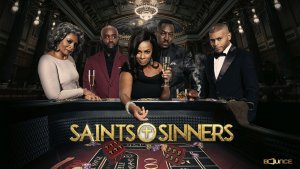 Bounce (@bouncetv) is the first and only multi-platform entertainment network targeting African Americans, with programming seen over-the-air, on cable, on DISH channel 359, over-the-air, over-the-top on Roku®, on mobile devices via the Bounce and Brown Sugar apps and on the web via BounceTV.com. Bounce features a programming mix of original series and movies, off-network series, theatrical motion pictures, specials, live sports and events and more. Bounce is part of The E.W. Scripps Company (NASDAQ: SSP).