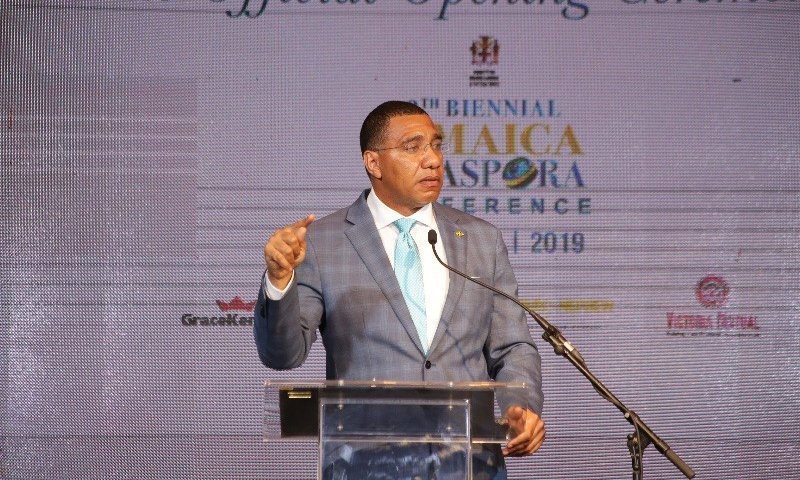 The Most Hon Andrew Holness, Prime Minister addressing the launch of the 8th Biennial Jamaica Diaspora conference at the Jamaica Pegasus hotel in Kingston on Sunday, June 16, 2019.

Prime Minister Andrew Holness says the Diaspora plays a critical role in the development of the economy.

Speaking at the launch of the 8th Biennial Jamaica Diaspora conference at the Jamaica Pegasus hotel in Kingston last evening (June 16) Prime Minister Holness underscored the contribution of the Diaspora to national development particularly in the areas of health and education. The Prime Minister assured the gathering of Jamaicans from home and abroad that the Government will continue meaningful engagements with the Diaspora.

“Something is happening that is positive in the diaspora but more than that, we must never underestimate the value of our diaspora in ensuring that the economy of Jamaica remains strong even in the depths of a recession”, said Prime Minister Holness.

So far this year, through the Diaspora, Jamaica has seen a record forty new projects being undertaken compared to previous years where the numbers were below 10.

In that regard, the Prime Minister expressed appreciation to the members of the Diaspora for their continued participation in the country’s development.

In the meantime, the Prime Minister said the Government is grateful and encouraged the Diaspora to continue in its efforts to build Jamaica.

“We don’t join this argument that there is no constructive engagement with the diaspora – the diaspora is an organic body, it operates on its own rhythm, it will work even better with Government coordination but even without Government coordination, you are Jamaican, some of you by birth, some of you by association, some from the generations and you understand the vibration of Jamaica and you want to feel a part of that to give forward.

So I encourage you to keep that special Jamaicaness, that vibration that keeps us together”, said Prime Minister Holness.