The Minister of Culture, Gender, Entertainment and Sport, the Honourable Olivia Grange, has announced that the government will be celebrating Jamaica’s athletes to the Tokyo Olympic Games. 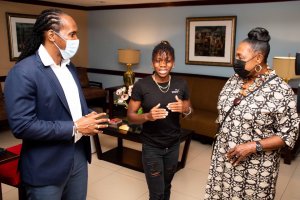 “We will be celebrating; we’re going to celebrate each and everyone of those athletes” said Minister Grange. “We’ll probably celebrate sometime around October.”

Minister Grange said it was important for the nation to thank the athletes:

“We have our disappointments, but I would say overall, I want to thank the athletes for their performance. They were able to still make Jamaica look good and make Jamaicans proud. There were some iconic moments that were very moving, very touching.”

The Minister made the announcement as she welcomed home the Olympic bronze medalist in the 100metre  hurdles, Megan Tapper, who arrived on the island from Tokyo Thursday night.

The welcoming party included the Minister of State, the Honourable  Alando Terrelonge; the Permanent Secretary, Denzil Thorpe; as well as members of the Hurdler’s family including her husband, Matheu; father, Merryck Simmonds; and stepmother, Lisa Gooden.

“I’m here to welcome home Megan. I am so extremely proud of her. She has made history. She’s won the bronze and for us, it’s like she’s won the gold. I had to find time to come to just be here for her and to greet her and welcome her back home.”

“Its an honour to welcome home Megan Tapper. Her accomplishment at the Olympic Games has made her family proud and, of course, all Jamaica. We salute her. We’re extremely proud of her.”

Megan Tapper said it was a long and difficult journey to becoming the Olympic medalist, “It was hard; but its motivating and inspiring and I wouldn’t have had it any other way.”

She praised the vibe in the Jamaican camp in Tokyo. ” It is cheerful. Everybody is gelling well. Everything is getting done that needs to be done. The support is there. The camaraderie is there and we’re just ready to prove people wrong.”

Source Office of the Prime Minister