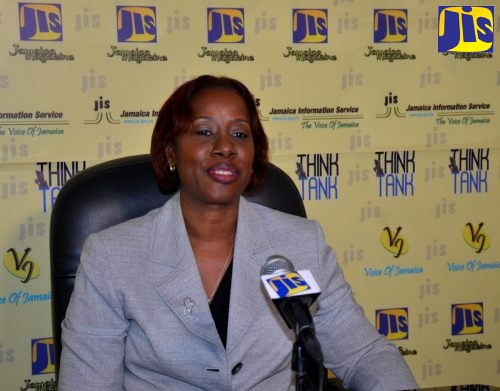 Senior Director of the Land Administration and Management Division (LAMD) of the National Land Agency (NLA), Felicia Wiltshire, outlines the functions of the new division during a JIS Think Tank on April 2.

Two new divisions have been established at the National Land Agency (NLA) to continue the titling of land under the Registration of Titles Act.

They are the Land Administration and Management Division (LAMD) and the Adjudication Services Division (ASD).

The departments were created out of the merger of the NLA with the Land Administration and Management Programme (LAMP), the latter of which was officially closed in December 2018.

Senior Director of LAMD, Felicia Wiltshire, explained that the new division will “continue the functions of LAMP as you know it”.

“The NLA (through LAMD) will be assisting persons in getting registered titles, and where titles exist, we will assist persons in dealing with these titles, such as estates, and whole or part transfer of titles,” she noted, while addressing a JIS Think Tank on Tuesday (April 2).

“Although we are located at Ardenne Road, at the end of every month, we have meetings in St. Thomas, St. Mary and Portland, so persons don’t have to come into Kingston. We will go into the communities, meet with beneficiaries, open files and get documents to assist in accelerating the programme for land titling,” she said.

This will be achieved by continuing the process of voluntary land titling through LAMD, and by way of systematic land titling under the new ASD.

The new divisions will work together to achieve the overall goal by targeting 4,000 titles in year one and 8,000 titles for each of the second and third years.

Senior Director of the ASD, Shalise Porteous, said that the mandate of the division “is to assist landowners who have been in open, undisturbed and undisputed possession of their land for upwards of 12 years, to claim ownership of the land via systematic registration using the adjudication process”.

Systematic land titling will facilitate the orderly registration of parcels of land in designated areas to authoritatively ascertain existing ownership rights. While the legislative framework for systematic registration is not yet in place, the ASD is already clear on how it will go about meeting the target.

“The parishes with the lowest rate of regulation will be targeted and any area where there is some sort of economic activity, for example farming, where we know that persons will benefit from having a certificate of title for the parcels of land, those are the areas that we are targeting,” explained Ms. Porteous.