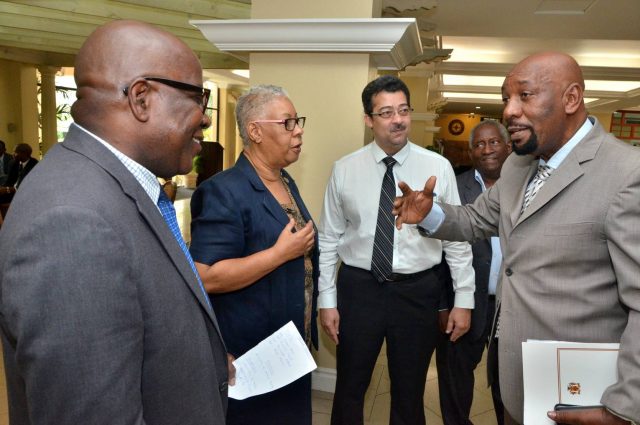 The Government is looking to implement the new framework for public sector salary negotiations during the 2017/19 contract period.

The framework, which has been endorsed by Cabinet, provides more structured and clearer guidelines for salary negotiations.

State Minister in the Ministry of Finance and the Public Service, Hon. Fayval Williams, said among the provisions is a proposal to extend the contract period from two to three years, which will be discussed with the unions.

The move, she said, is aimed at facilitating “prudent forecasting” of the wage bill and timely payments which, she noted “should ideally be at the beginning of each financial year.”

Mrs. Williams indicated that representatives of the Ministry will be discussing the overall framework in order to arrive at a consensus on its implementation.

She was addressing a special forum hosted by the Ministry for representatives of the Government, the unions and staff associations at The Knutsford Court Hotel in New Kingston on Wednesday, July 26.

Mrs. Williams said at the outset, discussions will be initiated regarding the development of negotiating protocols at the beginning of each round of salary discussions to which “the parties must agree.”

This, she said, would include all aspects of arrangements in place at individual Ministries, Departments and Agencies (MDA), including monitoring and communications mechanisms.

Mrs. Williams said Cabinet underscored the need for adherence to the Government’s policies and guidelines for negotiations.

These, she said, include the submission of all claims for central and local government bargaining units to the Director of Industrial Relations via the Financial Secretary; negotiations being led by the Ministry’s team supported by the respective MDA management; and escalation of unresolved issues through the hierarchy to the Minister with responsibility for the Public Service, and to the senior Portfolio Minister, if necessary.

“Should the matter remain unresolved , (then) consultations will be had with the (respective) Portfolio Ministers or the Cabinet for a decision on the matter, thereafter the industrial relations machinery may be employed,” she indicated.

Mrs. Williams said claims for provisions such as meal and taxi allowances, which are common across the public service, are to be negotiated by the Government with a team comprising representatives from unions and staff associations.

She noted that all other items will be negotiated with each bargaining unit, adding that “these will be carefully managed to ensure that no unfair advantage is derived based on positional power due to the size of bargaining units.”

Additionally, Mrs. Williams said administrative matters relating to provisions such as computers as well as occupational health and safety issues should be dealt with at the MDA level, while negotiations for employees attached to public bodies should be conducted with the management of those entities, unless otherwise directed or routed.

“While the Ministry of Finance and the Public Service represents the Government at the bargaining table, we want you to engage your parent Ministry and develop that kind of relationship that will see only issues of improvement in salaries and allowances being negotiated at the table,” the State Minister pointed out.

Mrs. Williams said that as the Government and trade unions prepare to commence discussions for a new wage contract, “let us all recommit to the general principles that have survived over a decade and embody the spirit of engagement and special dialogue between you and us.”

State Minister with responsibility for the Public Service, Hon. Rudyard Spencer, who also spoke at the forum, noted the challenges associated with the negotiating process, among which are protracted settlement timelines.

While acknowledging that the unions have a duty to secure the best package for their members, he said  “we have to consider the value of money and conclude negotiations in a timely manner to make each dollar reach the point that it should, instead of barely making it two or three years later.”