ANDERSON, S.C., Dec. 5, 2022 /PRNewswire/ — D28 Productions officially announced the release of its exhaustive historical film project, “Reclaiming the Throne,” a three-part docuseries that takes a deep look at long buried Hebraic history. “Reclaiming the Throne” reexamines the Trans-Atlantic Slave Trade over the course of centuries to discover the fate of those who have been ignored in the official record. Tracing the suspenseful and tragic journey of an entire population who were unwillingly scattered across the globe, the docuseries draws a direct line from those in the modern African Diaspora to their true origins: the Kingdom of Judah and the royal House of David. “Reclaiming the Throne” is now streaming free on Tubi. 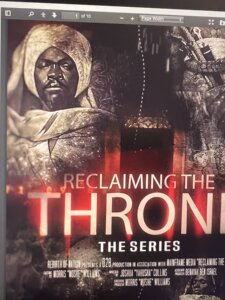 Poster image for the film.

“We knew this movie had to be different, but more than different, it had to be phenomenal,” said Joshua Cullins, Director and Executive Producer, and Morris Williams Jr., CEO and Executive Producer at D28 Productions. “This is the sort of information that can shift entire paradigms – reengineering our whole approach to cultural and religious education. But all too often, ancient history like this is laid out for us in a dry and sanitized way that fails to capture the interests of the intended viewers. ‘Reclaiming the Throne’ does just the opposite. It is based entirely on historical fact, yet manages to be entertaining, engaging, and interactive as well. This is one of our flagship projects, showcasing the quality content that D28 Productions routinely provides, and we are working to distribute it as widely as possible.”

Joshua Cullins and Morris Williams dive deep into four hundred years of struggles that have culminated in what has been called the black experience: the archived history of a people who are overcoming insurmountable odds yet producing the most outstanding leaders the world has ever known. Searching through historical documents, many of which are written by ancient slavers, Cullins/Williams both find answers to age-old questions about the identity of their people: where they lived, what language they spoke, and their national religion. Tracing their ancestors through DNA analysis, scientific research, and historical facts, Cullins/Williams discover a people who are none other than descendants of the royal House of David. And to understand their fall from grace, the team pores over biblical prophecies to meticulously pull together the strands of history that reveal the plight of their people – due to an unrepentant heart toward their Aluah, the Almighty One.

Go online to explore each episode and learn more about the diverse talents of the cast and crew of “Reclaiming the Throne.”