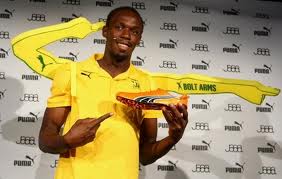 Olympic sprint champion Usain Bolt will earn an estimated $10-million a year in a sponsorship deal with German sportswear company Puma that will take him to the end of his career.

The Jamaican, the highest earner in his sport, will remain with Puma until after the 2016 Olympics when he will seek to add to his six gold medals.

Bolt, 27, signed up with Puma as a teenager a decade ago and the renewal of the contract is a fillip for a brand struggling to keep pace with larger rivals Adidas and Nike.

Bolt will be paid $10-million for each of the next three seasons and the same amount if he competes again in 2017 when London hosts the world championships, an industry source said.

Once he retires from competition, he will be paid $4-million per year to act as a Puma ambassador, the source added.

Forbes estimated that Bolt was paid $9-million annually under his current deal that expires at the end of the year.

“I have always been very happy to be a part of the Puma family, I am proud to represent them and delighted to continue with them for the years ahead,” Bolt said in a statement.

New Puma CEO Bjorn Gulden, who took the job in July, had made the renewal one of his initial priorities after the company said it was ending its sponsorship of the Oracle Americas Cup sailing team and European rugby union.

“He will play a crucial role in our future product concepts as well as brand communications leading towards the Olympic Games in Rio 2016 and beyond,” Gulden said.

Bolt is world record holder over both the 100 and 200 metres and his performances and charisma make him the stand-out performer in a sport that struggles to maintain a high media profile beyond the Olympics.

Puma, controlled by French luxury goods group Kering, has suffered falling sales and profits after focusing on fashion products rather than running shoes and soccer gear. Kering has criticized Puma in the past for not making enough of its sponsorship of Bolt.

The German sportswear company is reportedly set to replace Nike as kit supplier to English Premier League club Arsenal from next season. It already has a similar deal with German Champions League finalists Borussia Dortmund.

Bolt ranked 40th on the Forbes list of the world’s best paid sports stars, the richest track and field athlete. He had estimated annual earnings of $24.2-million over the past year, the bulk of which came from endorsements, Forbes said.

By: Globe and Mail

For the original report go to http://www.theglobeandmail.com/sports/more-sports/usain-bolt-signs-10-million-deal-to-stay-with-puma/article14494834/