VIBE, CHASE SAPPHIRE AND SHE MEDIA LAUNCH VIBE VOICES OF THE YEAR CAMPAIGN

Vibe Voices of the year

NEW YORK, June 23, 2022 /PRNewswire/ — VIBE, Chase Sapphire® and SHE Media today launched VIBE Voices of the Year, a 3-month digital campaign across VIBE and SHE Media that will shine a much-deserved spotlight on exceptional Black women across industries and communities who are making their mark with ground-breaking contributions in their fields. Each honoree will be featured in a VIBE cover story and a promotional campaign across 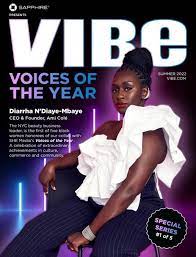 Vibe Voices of the year

the SHE Media Meaningful Marketplaces network of websites owned and operated by Black women.

The first group of VIBE Voices of the Year honorees is:

A second group will be announced later in the three-month celebration.

The VIBE Voices of the Year were selected by an editorial panel led by VIBE editor-in-chief Datwon Thomas. Other members of the selection panel include Christine Imarenezor, Executive Editor, VIBE, Eugenia Miranda Richman, Editor-in-Chief of SheKnows.com, and Jiji Ugboma, founder, Clever-ish Magazine and Senior Manager of Publisher Engagement, SHE Media.

“VIBE is honored to have this opportunity to recognize these powerful, culture-shifting Black women gamechangers through the Voices of the Year,” said Thomas. “This campaign will celebrate and amplify their powerful voices through a series of memorable digital activations presented by Chase Sapphire across VIBE and SHE Media channels.”

“Congratulations to the VIBE Voices of the Year honorees. Chase Sapphire is thrilled to team up with VIBE and SHE Media to celebrate all of these trail-blazing women and recognize the lasting impacts they are making in their respective fields, as well as across their communities and beyond,” said Marleta Ross, General Manager of Chase Sapphire.

“Voices of the Year is a longstanding SHE Media initiative that celebrates culture-shifting creators and the incredible work they’ve done in their respective fields,” said Samantha Skey, CEO of SHE Media. “We were delighted to partner with VIBE and Chase Sapphire to extend this recognition to a new audience.”