VISIT PHILADELPHIA's latest African-American marketing initiative centers on a documentary-style travel video series hosted by Philly native Tarik Black Thought Trotter of The Roots. The five-episode series, dubbed We Got You: Philly by Tarik, taps into the power of a national celebrity, pairing Trotter with trendsetting influencers to show off Philadelphia. (PRNewsfoto/VISIT PHILADELPHIA)

PHILADELPHIA, Sept. 13, 2017 /PRNewswire/ — Today, VISIT PHILADELPHIA® launched its latest African-American marketing initiative—the key component of which is a documentary-style travel video series hosted by Philly native Tarik “Black Thought” Trotter of The Roots. The five-episode series, dubbed We Got You: Philly by Tarik, taps into the power of a national celebrity, pairing Trotter with trendsetting influencers to show off Philadelphia. The videos will be promoted across all of VISIT PHILADELPHIA’smarketing channels to gain video views, visits and, of course, hotel stays.

Part of VISIT PHILADELPHIA’s With Love, Philadelphia XOXO® campaign, the series is viewable online at visitphilly.com/wegotyou. Digital advertisements that drive viewers to watch the videos will also appear across websites such as Essence, Madame Noire and YouTube. 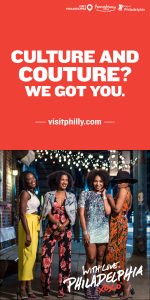 “We’re tapping into the energy of the black travel movement in our newest campaign inviting African-American travelers to visit,” said Jenea Robinson, senior media relations manager, VISIT PHILADELPHIA. “The videos have an insider feel that will resonate with this audience and spark word-of-mouth and social sharing from residents, visitors, media and influencers. As far as we know, no other destination marketing organization is speaking to African-American travelers in this way.”

New York-based Fictionless, a production company with strong relationships with top-tier brands and digital content distributors such as Refinery 29, Viceland and MTV, directed, filmed and edited the video series. The company was selected based on its style, aesthetic and experience.

The Trendsetters:
Seven trendsetters join series host Trotter throughout the episodes. These people were chosen for their influence outside of Philadelphia and with VISIT PHILADELPHIA’s target audience:

The Media Buy & Additional Marketing:
According to Nielsen, African-Americans spend more time on video and consume more social media than the general population, and it’s important for VISIT PHILADELPHIA to reach visitors in these spaces.

The video series and new creative messaging will be supported through various paid efforts appearing on high-profile partner sites such as Essence, Madame Noire and YouTube.

Through a programmatic digital buy, the ads will reach African-Americans online and potentially appear on sites such as Ebony, The Root, Complex, Travel + Leisure, Hypebeast and TripAdvisor. College-educated African-American travelers who are interested in visiting an urban destination, earn more than $75,000 annually and live in the New York, Washington DC or Philadelphia areas make up the target audience for this campaign.

Visit Philly’s social media channels will distribute the videos through paid and organic posts, and the series can be viewed online at visitphilly.com/wegotyou.

VISIT PHILADELPHIA® is our name and our mission. As the region’s official tourism marketing agency, we build Greater Philadelphia’s image, drive visitation and boost the economy.