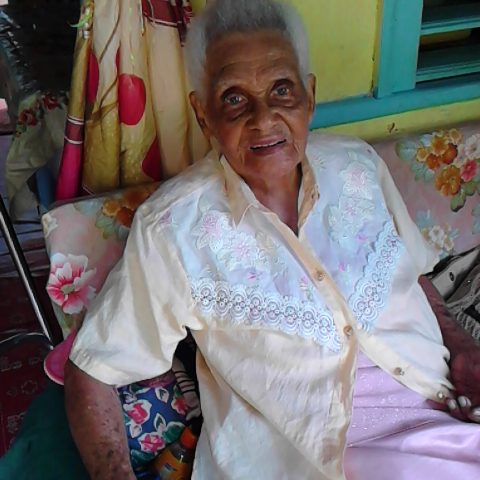 It is with deep sadness that we report to the world that Flossie Louise Russell more affectionately known to us as Aunt Flossie has accepted Her Maker’s invitation to be by His side.  We are not selfish but, as humans we wanted her to be with us indefinitely … but our loving Father had other plans for His Servant Aunt Flossie’s life. So we reluctantly accepted His request and therefore let her go.

As already posted in Vision Aunt Flossie celebrated with us another of her many life’s milestones. She was 108.

It was on August 7, 2017 that we celebrated with blood relatives, church family, friends and well wishers Aunt Flossie’s 108 th birthday.  She was vibrant, alert and assured.  Little did we know that this was her last birthday with us.

At fore noon today, September 8, 2017,  her name flashed on the screen of my cellphone.  I was anxious to answer same as would a child to open a gift containing a toy. Alas!  It was Aunt Flossie’s ever loving caregiver Stacey, who thirstily advise that “Aunt Flossie is dead”.  I was devastated to the point of being left speechless.  I had not been prepared for this news. Her church sister Norma Onfroy was more acceptibg of the news … she had visited Aunt Flossie in hospital.

Unknown to me Aunt Flossie had been hospitalized in the St. Ann’s Bay Hospital for close to a week.  Had I been informed no effort nor resource would have been spared to visit her.  I would now have had some closure.  We try as Journalists to stay detached, but do excuse me, I am a mere mortal.

To her son, dear friends, Methodist family and close friend Mrs. Claris Smith in the USA we express our condolences. Mrs. Claris Smith was promptly informed of Aunt Flossie’s passing. Her uncontrolled grief was heard, as she reacted to the sad news.  We fell the fine Christian qualities of Aunt Flossie’s life made a prime candidate for eternity … to sit at her Lord’s side.

May her soul rest in peace and light perpetual shine on her.

Hopeton O’Connor-Dennie is Senior International Correspondent & photojournalist for Vision.  He went to York District on September 7, 2017 to celebrate Aunt Flossie Louise Russell’s life at 108 aka the Queen Of York.  We at Vision are saddened at Aunt Flossie’s death …  we mourn.