NEW YORK, Nov. 2, 2022 /PRNewswire/ — Touted as a fun board game laced in history, Harlem-Opoly https://www.harlem-opoly.com brings the traditions of monopoly to the streets of Harlem during its renaissance period. The board game takes players through the highs and lows of the Harlem Renaissance including the famous personalities, landmarks, and events that forever shaped the history of Harlem. Josephine Baker, Fats Waller, Florence Mills and Countee Cullen are among some of the personalities highlighted in the game. Harlem-Opoly also features exclusive landscapes of the time, that still exist to this day. 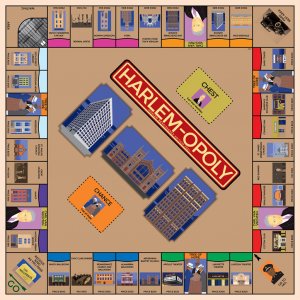 Originally a white upper-class neighbourhood, the rapid overdevelopment of Harlem in 1900s resulted in empty buildings and landlords who were desperate to fill them. Consequently, many middle-class black families began to move to the Harlem resulting in a population boom that prompted a Renaissance. The Harlem Renaissance lasted from the 1910s-1930s and was regarded as a golden age for African American artists, musicians, and writers.

Far from the average board game, Harlem-Opoly is loaded with twists and turns, such as learning the most throughout the game and gaining supremacy on all that’s in Harlem. Also, instead of railroads, players will have to look out for four historical churches in the neighbourhood. There are also opportunities to purchase properties such as the Savoy Ballroom, Apollo Theater and more.

At the heart of this unique board game is a vision to inspire Black excellence and generational wealth. The Harlem-Opoly Board game is a fantastic resource designed for those who want to improve their knowledge about Harlem history and is guaranteed to deliver hours of competitive entertainment. It is ideal for family games night, as a home-schooling resource, friends’ night-in and after-school programs.

Carolyn D. Johnson is the mastermind behind Harlem-Opoly. She is also President and Founder of Welcome to Harlem, https://welcometoharlem.com/ a company that is focused on the rich history and cultural diversity of Harlem. The company’s educational arm, Harlem Roots, teaches children about the people, events and places that shaped Harlem’s history.

When asked about the motivation for creating the boardgame, Johnson explained, “We designed Harlem-Opoly because we knew we wanted more people across the country to have an opportunity to learn and experience the rich history of the Harlem Renaissance. We’ve been educating youth in the area since 2004 and we know that people are interested in learning even more. This boardgame adds to the excitement and discovery of a neighborhood with a history that will never be forgotten.”