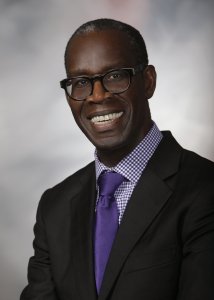 Dr. Oloya was recruited as a teacher with York Catholic in December 1988. He taught junior grades at St. David CES in Maple, and three years later transferred to St. Vincent de Paul CES as a Junior-Intermediate teacher.

Dr. Oloya was appointed Vice Principal in September 1999 and Principal in the Spring of 2001. He was an administrator at St. Vincent de Paul CES, Divine Mercy CES and All Saints CES. In November 2011,  he was appointed to his current position as Superintendent of Education: School Leadership. He also oversees the Safe Schools Portfolio in the Elementary panel.

Dr. Oloya is recognized for his passion in advocating for social justice, equity, diversity and inclusion. He founded I Read ABC, a charity supporting deaf and blind students in Africa. In October 1992, he developed and pioneered the Karibuni African music show at CIUT 89.5 FM. His weekly column, Letter from Toronto, has been published since July 1996 in the Uganda-based New Vision (www.newvision.co.ug), read throughout East and Central Africa.

Dr. Oloya completed his doctoral studies in 2010, and earned a PhD for his groundbreaking research on child soldiers. He published Child to Soldier in 2013, and during summer months has worked alongside peacekeepers of the African Union Mission in Somalia (AMISOM). His latest book, Black Hawks Rising, chronicles AMISOM’s successful war against terror. In 2012, York University awarded Dr. Oloya an honorary Doctorate of Law (LLD, honoris causa) for his humanitarian and social justice work in Africa.

During his appointment as Interim Associate Director, Dr. Oloya will continue to act as Superintendent for Area 3 schools.